Meet Pauline Schoech, a Civil Engineer With a Passion for Virtual Design and Construction 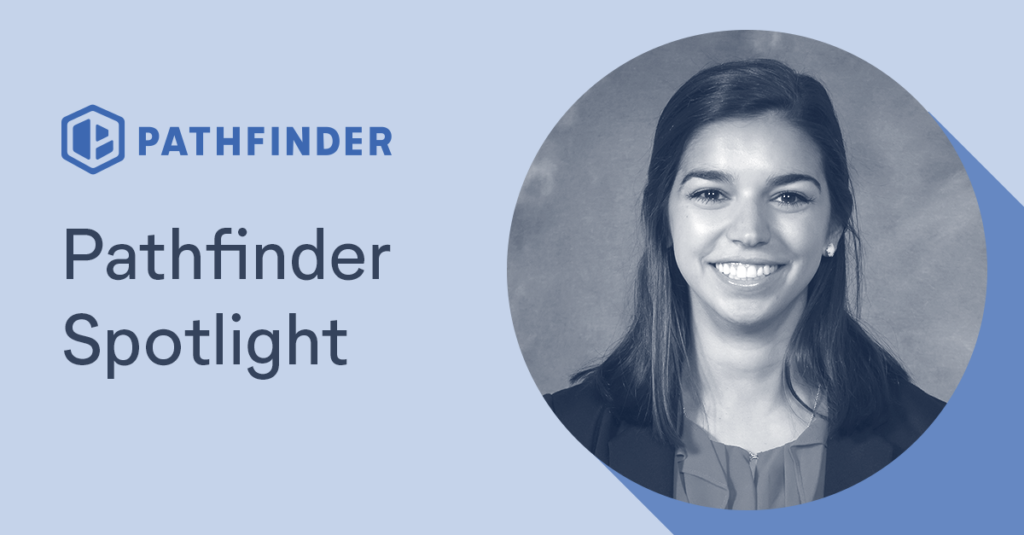 Meet our November Pathfinder, Pauline Schoech, a Pensacola-based VDC Coordinator at Brasfield & Gorrie. She first became interested in construction during middle school when her older brother (who works as an estimator) brought blueprints home. After getting a civil engineering degree from a top-ranked engineering school, she was still intrigued by construction, which led her to pursue a career at a general contracting firm.

A Childhood Spent Dancing, Playing Soccer, and Excelling in School

Pauline grew up as the youngest of three children and was immersed in Atlanta’s Greek-American community. Her first-generation father (who moved to the US for college) owned a fast-food restaurant, and her mother worked at a non-profit.

The family attended a Greek Orthodox church, where Pauline was active and started participating in Greek dance programs when she was still very young. When she got to middle school, she started traveling to large-scale Greek dance competitions, where church teams from across the East Coast gathered annually.

“It was a really fun way to get together with friends you’d met years before and gone to camp with,” she said.

In addition to Greek dancing (which she continued through high school), Pauline was a competitive soccer player. At the age of 5, she (along with her parents) learned that ballet wasn’t for her, so they put her in soccer instead. She played for all four years of high school and was strongest on the back line as a defender.

She describes her time in high school as “ordinary” in the sense that she typically enjoyed school, tested into AP classes, and spent time with friends and family. Still, she always knew that the best was yet to come.

Early Inspiration from a Set of Blueprints

Pauline’s brother (who’s nearly a decade older) was working as an estimator for a construction firm when she was in middle school, but she never really thought about construction one way or another until he brought home a set of plans one day.

“I thought they were the coolest thing, like a mixture of art and math,” she recalled. “That’s what pushed me to start thinking of construction as a potential career path.”

Because she was strong in math, her mother had been encouraging her to consider architecture as a career, but she was apprehensive after hearing about people’s struggles getting through architecture school.

“I couldn’t necessarily see myself doing it,” she said. “Construction just seemed broader—and with more opportunity.”

Pauline applied to only two colleges: University of Georgia and Georgia Tech. Though she loved UGA’s campus in Athens, it was impossible to turn down a full scholarship from Georgia Tech, one of the top engineering schools in the US, where her brother and sister had also gone. (Since her husband and sister-in-law also went there, her mother likes to brag that the family collectively has eight Georgia Tech degrees, including undergraduate and master’s programs.)

Though she had never set foot on the campus in downtown Atlanta prior to accepting her offer, she quickly acclimated and felt at home. Since Tech didn’t have a construction program, she decided to major in civil engineering, which seemed like the next best thing.

During her sophomore year, she wanted to take advantage of the school’s co-op and internship programs, which let students gain real-world experience (and make money) by taking semesters off to work for a variety of companies. The slots were highly competitive, and she wound up getting a co-op at a transportation engineering firm that specializes in roadway design, where she worked for three subsequent semesters. She liked the design work but knew that sitting behind a desk all day full-time wasn’t for her.

During her fifth and final year, she landed an internship at Brasfield & Gorrie, a large general contracting firm with 12 offices in the Southeastern US and Texas.

Her first project was in a prime Atlanta location by the BeltLine with commercial buildings, a new Kroger store, and expanded parking as part of a large mixed-use development. She arrived when the new foundations were still being put in and can recall a giant hole in the ground from where they were putting in caissons.

“I was so lucky with the project team I got assigned to,” she said. “Their motto was ‘no stupid questions,’ and they were eager for me to go out, walk the site and talk to the subs. The superintendents were also the nicest guys. They made it a very welcoming environment.”

The internship was so successful that Pauline got a job offer from Brasfield & Gorrie immediately after her internship ended. She had a short break between school and full-time work, as she started her new job just two weeks after graduation, in May 2018.

Joining Brasfield & Gorrie officially, she started as a preconstruction manager and then switched to project management a year later. After a year in the Project Management role, Pauline learned that her husband was being relocated to Pensacola, Florida, for his job.

After talking it over, they decided to make the move to a new city and a new state. Since Brasfield & Gorrie has a considerable presence in Florida, they were happy to keep Pauline on staff, and she was even able to switch roles and join the Virtual Design & Construction (VDC) team.

This career move was a perfect next step for Pauline. “I absolutely love VDC, and it’s the area I intend to focus on going forward,” she said. “I get to play with all the fun, new technology that helps projects to succeed.”

Pauline was introduced to OpenSpace in the course of working on a 57-acre project in Pensacola that encompasses a hospital, medical office building, and central energy plant. It’s a massive endeavor that requires 15 project managers and nearly 600 workers to be on-site every day.

Since people from several Brasfield & Gorrie offices are actively collaborating on the project (in addition to personnel from the architecture firm, who are also spread out across the Southeast), OpenSpace has been extremely useful for keeping everyone on the same page.

“It’s a great way to showcase the project and all the progress we’ve made without incurring the expense of people constantly traveling down to Florida,” she said. Pauline and a colleague share OpenSpace capture duties, and one of them walks a chunk of the site every day.

“By the end of the week, you get a really holistic view of what the job looks like without having to spend eight hours a day on the site walking and taking photos,” she said. OpenSpace has also been valuable for quality control purposes. For example, the project leverages prefabricated bathroom pods, which resulted in specific requirements for the concrete slab pours. With OpenSpace, the VDC team could load up the BIM model, walk the site and compare actual site conditions to the model to ensure major issues were caught before the pods were delivered. OpenSpace also lets the architects remotely drop in to double-check the installation of overhead MEP alongside the model.

“Our architect is a huge proponent of OpenSpace and brought it to the table in the first place,” Pauline said. “They check the captures frequently, and their whole team is able to use it.”

Overall, Pauline has been blown away by how easy OpenSpace is to use—and teach others to use. “Absolutely anyone can pick up a 360 camera, strap it to their hard hat and be able to use OpenSpace in five minutes,” she said.

Pauline thinks being a pathfinder is synonymous with innovation, which is one of Brasfield & Gorrie’s core values. The company constantly seeks innovative approaches to address construction challenges.

Pauline is proud of how her innovative use of OpenSpace has helped give colleagues across the country a view into what her team is accomplishing on the ground in Pensacola, and she plans to continue keeping her colleagues informed about how new features and products can make their work more efficient.

“I think construction sometimes gets a bad rap for being a little behind the times, but one thing OpenSpace and the other technologies we use have shown me is that people are willing to learn and try new things, so long as they’re confident it will help in the long run,” she said. “Everyone really just wants to see optimal results.”

Pathfinders are power users like Pauline who excel at using OpenSpace. You can check out all of our published Pathfinder Spotlights in the OpenSpace Community gallery. If you’d like to be a Pathfinder, submit your Pathfinder application today.