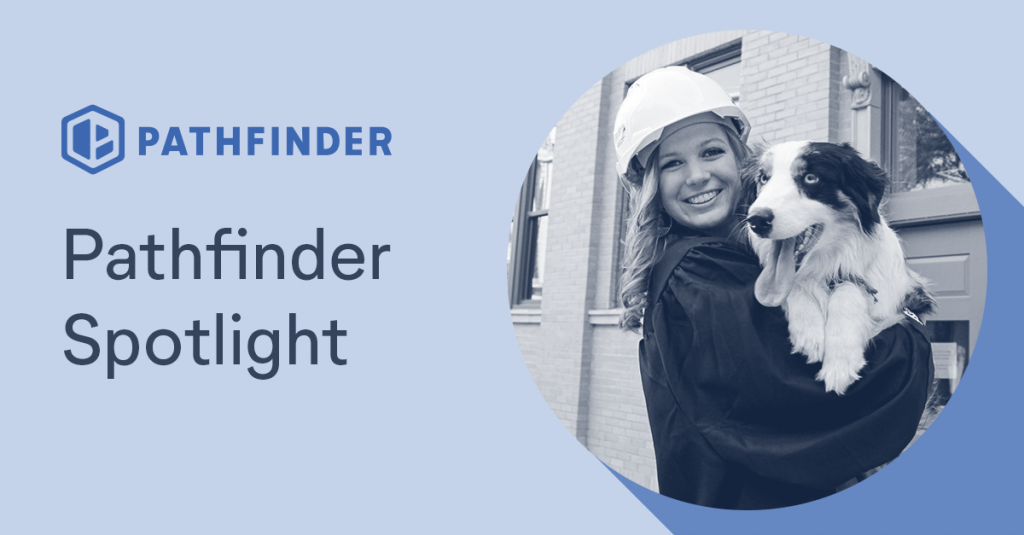 Meet our latest Pathfinder, Beka Graham, who became a Project Engineer for Joeris General Contractors in May 2020. Her curiosity, drive, and attention to detail eased the transition from college into her first construction job at the height of the pandemic.

An Early, Avid Watcher of HGTV

Beka grew up with two siblings in a suburb of Houston called Katy, Texas, where her parents were both accountants. She had little interest in following in their footsteps—or in any job that would keep her behind a desk.

Growing up, she and her mother were obsessed with HGTV, especially “Fixer Upper,” a popular show in which Chip and Joanna Gaines help people remodel their homes. Beka says they often had it on in the background when they were folding laundry or cooking meals. She loved seeing the homes come together and the emotional response of the homeowners when they saw them for the first time.

From an early age, Beka was taught to not be afraid of hard or difficult jobs, as her parents involved her in a lot of projects around the house that required manual labor. This was referred to by her parents as “college appreciation work.” These early experiences with home maintenance and home improvement helped to spark Beka’s interest in construction.

When she was still in high school, Beka’s interest in construction started to crystallize. At the official school Career Day during her junior year, when students were asked to dress the part of their future career, she came to school wearing a tool belt and steel-toed boots. People (wrongly) assumed she was planning to become an architect but she quickly corrected them, saying she planned to be a construction worker.

She didn’t appreciate some of the assumptions that were made because of her appearance, and vowed that she would forge her own path regardless of what others thought. “I drive a truck, I like to go hunting and fishing, and I’m in construction—but I don’t come across like that type of person,” she said. “People automatically assumed that I wanted to be on the design side of things, even back then.” The stigma that women should be designing instead of building is something she is passionate to change.

In her senior year, she applied to only two colleges: Texas A&M, which has a top construction science program, and the University of Texas at Austin, which has a great business school. (They also happen to be her parents’ alma maters.) She decided on Texas A&M because of her desire to pursue a career in construction, which seemed more exciting and fulfilling than a job behind a desk.

Figuring Out Life After College

Beka loved her time at A&M and the hard-working, driven people she met in the construction program, which collectively enrolls about 1,000 students. There were only a handful of female students in her classes when she started as a freshman, but she was pleased to notice a substantial increase during her time there.

She studied abroad for a semester in London, where she spent half the time taking classes and the other half doing an internship. She loved traveling and paying attention to the nuances of architectural and building styles in various European countries.

Back in Texas, she attended several job fairs hosted by the university and secured interviews at several construction firms, including Joeris General Contractors. The interview with Joeris would be conducted by several high-level team members. Although she was a little nervous, the interview went well and one thing, in particular, stood out to her.

“One of the VPs in my interview said, ‘What does servant leadership mean to you?’ and I knew then that I wanted to work for this company,” she said.

Servant leadership is something that means a lot to Beka, as it describes the idea that leaders have a duty to serve those who follow or report to them (popularized by Robert K. Greenleaf). She was thrilled that this would be reflected in her work at Joeris and, when they offered her a job, she knew that was the right one for her.

In September 2019, at the start of her senior year, she accepted an Austin-based position as Project Engineer for Joeris. Little did she know that she would begin her construction career in the midst of a global pandemic.

Fortunately, while many of her classmates had job offers rescinded due to the pandemic and uncertain economy, Joeris kept its word and Beka started her new job in May 2020, right after graduation.

Acclimating to a new job and new colleagues when everyone was wearing masks and many meetings were happening remotely was strange at first, but Beka quickly became used to it. Her favorite part of the job is that it’s different every day.

“It’s very interactive; I meet a lot of new people and I’m constantly learning,” she said.

Specifically, Beka’s role as a PE encompasses handling all the submittals, tracking RFIs, taking care of all the documentation for Austin Energy Green Building (the local equivalent of LEED) and some QA/QC work. She’s also responsible for progress photos, which OpenSpace’s 360° photo documentation technology has facilitated for interiors. For exteriors, she flies drones to take pictures.

Beka found OpenSpace and Joeris’ other software platforms to be intuitive and easy to use, though they were mostly all new to her. At Texas A&M, students didn’t learn many specific platforms, since the instructors knew that every construction firm had a unique technology stack.

“In college, we did a lot of surveying and were going to use drones, but then quarantine started and we had to do it online,” she said.

Beka’s first project was remodeling a 90,000-square-foot elementary school in Austin, which has been a fascinating logistical challenge. School is still in session, though the students are learning out of portable buildings in the back, divided from the active construction site by a fence. The logistics of getting equipment in and out while being mindful of students’ schedules—and safety—can be challenging.

When Beka started strapping a 360° camera to her hard hat and walking the job site regularly (allowing OpenSpace to automatically capture and pin imagery to the floor plan in the background), the Superintendents initially poked fun at her. But they came to appreciate the software and how much technology has advanced in recent years.

Specifically, the field team uses Beka’s OpenSpace captures to share progress with the architect and other project stakeholders who can’t come to the site regularly. Coupled with the exterior imagery from drones, they can also double-check that installations have been done correctly from wherever they are.

Before using OpenSpace, Beka was taking manual pictures from her phone. However, these manual photos sometimes didn’t capture the exact feature or angle someone wanted to see later on. They were also difficult to organize. OpenSpace opened up a whole new world of collaboration. Since OpenSpace captures continuously and automatically, every square inch is captured and easily visible by anyone.

“The more we use OpenSpace, the more I can’t imagine how we ever got by without it,” she said.

Beka is also excited about the potential of OpenSpace’s automated progress tracking to facilitate pay apps.

Planning for the Future

Beka isn’t the only one of her siblings to diverge from their parents’ professional path; her brother is a youth pastor, while her sister is at Baylor University getting a Master’s in social work. In their own way, each one is pursuing a path of servant leadership.

Beka’s mother is especially fascinated by her career path and constantly asks her what her day was like. She enjoys hearing about all the different tasks and challenges that occur on a construction site.

In her free time, Beka likes to quilt (which she learned from her grandmother), cook, bake, and hike the nearby trails with her two dogs. She also loves hunting, fishing, and boating when the opportunity arises.

Although her career is still fresh, she is already planning her future. She’s focused on eventually being promoted to Assistant Project Manager and envisions working in commercial construction for a long time.

“I’m so excited about the growth in commercial—specifically the boom in Austin and how many people are moving here. There are so many opportunities for career growth,” she said. “I want to buy a home eventually and fix it up on my own, though.” No doubt the many lessons learned from Fixer Upper on HGTV will come in handy!

Beka is also proud to be an OpenSpace Pathfinder. To her, being a Pathfinder means having the opportunity to “blaze the way forward for the technology side of construction and all its advantages.”

From everyone here at OpenSpace, we couldn’t be more excited to work with Beka and the amazing team at Joeris, and we look forward to seeing all that they accomplish in the future.

Pathfinders are power users like Beka who excel at using OpenSpace. You can check out all of our published Pathfinder Spotlights in the OpenSpace Community gallery. If you’d like to be a Pathfinder, submit your Pathfinder application today.