Meet Moe Hassan, an Assistant Superintendent Whose Family Instilled His Love of Construction 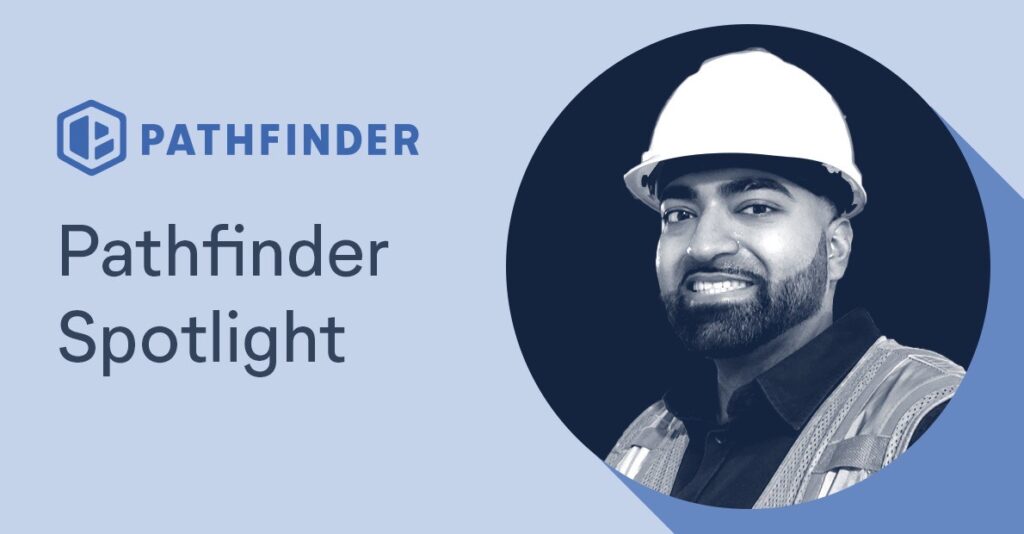 Meet our newest Pathfinder, Moe Hassan, who works at Lee Kennedy in Boston. His love of construction has deep roots in his family’s history.

A Family of Builders and Dreamers

Moe Hassan was not your average kid. At the age of 14, while in the eighth grade, he decided to make a career in the construction industry. His classmates at the time might have been focused on which games to play at recess, or what kind of lunch the cafeteria was serving, but Moe had a dream and he was determined to make it a reality.

This was not a decision that came lightly. Moe was very well-versed in both the rewards and the demands of construction work. In fact, he didn’t have to look very far for a role model in the industry. His grandfather was a highly-trained architect and his father was in the construction industry in his native Pakistan before moving to America.

Moe’s father became a successful GC in his home country, building hotels, medical stores, and heavy civil construction projects. In the late 90s, he was given the opportunity to obtain a lottery visa that would require saying goodbye to his parents, close relatives, and friends, then moving halfway around the world to a new country he had never visited. There was only one country he believed would be worth the sacrifice: the United States.

A Young Man With a Plan

When Moe’s family moved to the U.S. they opened a new business, and through hard work, his parents achieved a lot. It wasn’t easy, but they made it work. Moe was born in 1997 and began helping his father with the business from a young age. He learned quickly, and in middle school, he eventually broke into the construction industry. He worked on all kinds of projects, helping to renovate apartment units and stores as a laborer and learning trades like carpentry in the process.

It was around this time that Moe heard about the Wentworth Institute of Technology. Located in Boston, with a strong focus on STEM subjects, it seemed like a perfect fit for him. He set his sights on their Construction Management program and worked hard in high school to take the next step in making his dream come true. He took Advanced Placement classes and studied hard for the SAT. As he submitted the application for admissions to Wentworth, Moe knew that his life would soon change.

Moe completed the program in 2019 and when he graduated from Wentworth, walking across the stage to accept his diploma, his parents were there in the audience cheering him on. “I know it meant a lot to them to see me accomplish something like that and start my own career in construction,” he said. “Especially, with all the sacrifices they made to come to America and start their life over.”

True to his go-getter reputation, Moe wasted no time starting his first job. He began working full-time at Lee Kennedy just one day after graduation!

The other thing that he really appreciates is being able to deliver buildings that people will use for decades to come. “Right now, we’re building a life sciences lab. Previously we built TV studios for a major broadcasting company as well as a parking garage. No matter what type of building it is, there’s satisfaction in knowing that someone will use it for work, education, research, or pleasure. That’s what motivates and excites me to come to work.”

Growing Into the Role With Lee Kennedy

Moe has been thrilled with the culture at Lee Kennedy and the opportunities to expand his knowledge and expertise through on-the-job training. He says that Lee Kennedy is one of the top 10 GCs in Massachusetts in terms of projects. However, its size and sterling reputation haven’t made them impersonal or stuffy. “It’s corporate, but it has a culture where it doesn’t feel corporate,” he says.

Over the last 15 months, Moe has really grown into his role and played an integral part in completing some big projects. He’s currently working on a life sciences lab which is located right on the seaport, overlooking the river. His daily routine varies, but he knows when he wakes up every morning that he’ll be getting one step closer to a finished building, which is exciting.

“As an Assistant Superintendent, I’m not so much planning the long-term as I’m doing the day-to-day things,” he told us. “I make sure that what’s on our project schedule or pull plan is completed every day, and I talk to our foremen to find out if there’s an issue. When issues do come up, I figure out how we can resolve it.”

For example, the project owner decided to add more glass windows, which would open up the space and give future tenants a beautiful view of the water. For Moe, that meant helping to document all work in place and coordinate all changes associated with the redesign, including mechanical trades, and architectural trades.

Earlier this year, Lee Kennedy began using OpenSpace for automated 360° photo documentation of job sites. Moe quickly became a power user of our platform and has now joined our brand new Pathfinders group for those who are excelling and evangelizing OpenSpace.

He says OpenSpace helped his team get through a tough year, with a global pandemic looming and lockdowns being declared at a moment’s notice. “OpenSpace helps me communicate easily with trades and other team members.”

Moe also finds it helpful to have a visual record of the job site. He uses the “time machine” functionality within OpenSpace to keep track of what is behind the walls. “I can capture images when the walls are exposed and then go back and show something to a sub later on.”

“OpenSpace has been very good. It’s been very easy for people to pick up on. It’s extremely easy to use, and we see the benefits right away. I’m personally happy to be able to use the best technology as I begin my career.”

We’re so glad that Moe’s construction dream is coming true and we’re thrilled to be a part of it. Great job, Moe! You can check out all of our published Pathfinder Spotlights in the OpenSpace Community gallery. If you’d like to be a Pathfinder, submit your Pathfinder application today.