Meet Cameron Wahl, a Childhood Baseball Star Who Made It to the “Big Leagues” of Construction 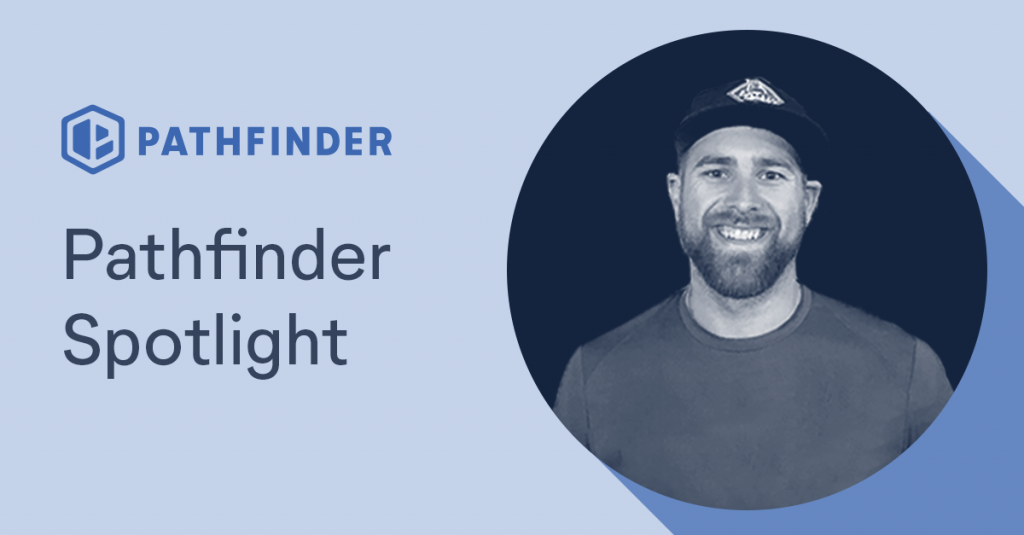 Meet our Pathfinder, Cameron Wahl, who works at Balfour Beatty in Texas. His tenacity, curiosity, and passion for making systems more efficient have accelerated his career in construction management.

Growing Up Near the Cornfields of Indiana

From his desk in Dallas, Cameron Wahl helps a national team of construction experts at Balfour Beatty use technology effectively across nearly two-dozen projects. But he grew up in a small town, where construction connections were much closer to home.

Cameron was born and raised in Harlan, a small town in Indiana. Growing up he says he had two neighbors—his grandparents, a man across the road, and a cornfield or a bean field—depending on the time of year. This type of childhood came with many advantages, including plenty of space and time to play sports.

In order to keep Cameron and his older sister busy year-round, his parents got them involved in all kinds of athletic activities. Cameron played football, baseball, and basketball, ran track, and was part of the cheerleading squad. To help stay active he took up boxing and even today, still teaches boxing classes a few days a week before work.

His father was involved in the construction industry, so Cameron got exposure to building from a young age.

Getting An Early Education in Sheet Metal

Cameron recalls that his parents said he was curious from a young age, always taking apart his toys to see how they work—but not putting them back together!

Cameron got started in construction early with a family connection. His father had spent a career as a contractor in the sheet metal and HVAC business. When Cameron was in fifth grade, his father started working at a new sheet metal company. As Cameron grew older he occasionally got a chance to help out around the shop along with a few friends (when they weren’t playing sports).

“We painted, we loaded trucks…pretty much anything they needed done that they weren’t willing to pay someone to do, we did!” said Cameron. He says he inherited his strong work ethic from his parents, and of course, he appreciated having a bit of spending money as an adolescent.

Switching From Sports to Construction

College was always in Cameron’s future. Studies came easily to him, and he was accepted to Ball State University in Muncie, Indiana. Cameron enrolled thinking he would major in Athletic Training, due to his love of sports. But the program focused more on anatomy and physiology, which were not his strong suits, and so, after not getting into the athletic training program he decided to switch majors.

He reviewed his options and spoke with two friends in the Construction Management program. They were enjoying their studies. And by that point, Cameron also had done some commercial roofing in the summers, so he had a good idea of what he was getting himself into. “I liked the idea of someday running my own crew or being a Construction Manager,” he said.

Throughout his training in construction management, Cameron continued to turn to his original mentor, his dad. “He was always there if I had questions on coursework. In fact, my dad was my mentor for our capstone project.”

As with sports, Cameron was tenacious in pursuing his goal of working in construction. During the summer before his senior year, he secured an internship with Rogers-O’Brien, a GC based in Dallas, Texas. He lived by himself in Dallas, residing in an extended stay hotel and devoting his entire summer to work. Since this was his first true construction job, he was eager to learn as much as possible.

Open to guidance and feedback from his managers, Cameron was curious about everything, and never complained about busy work. One memory that stands out in particular from that summer was testing whether an underground tunnel they had built below six lanes of highway was waterproof. “I remember sitting there in the heat while the hose ran, just looking for water leaks all day.”

The hard work paid off. After a successful summer, he was offered a full-time Field Engineer role at Rogers-O’Brien. Returning to the company after graduating from college was a great opportunity and learning experience for Cameron. His first project was a big mixed-use development alongside other entry-level engineers, who all looked out for one another. “It was great not to have to look for a job out of college, and I made some good friends. We were so young and fresh, everything was new.”

After a few years, Cameron advanced to the role of Assistant Superintendent. He liked being on-site and being around people, but he felt a need to strive for something more. Around this time, he became intrigued with construction technology, experimenting with different tools and trying to find ones that helped speed up day-to-day processes.

He had the opportunity to beta test a new application, Project Atlas, and the experience convinced him he wanted to have a future in construction technology.

“I love being the first to use a new product or feature,” he said. “I still geek out about that.” I was always the guy who asked: “Why are we writing things down with a pencil and paper and then scanning it and saving it on the computer?” I knew there had to be a better way. I became obsessed with finding new ways to make people’s lives easier with technology.”

It was around this time that Cameron fortuitously learned that Balfour Beatty was looking for another member to join its technology team. The national scope of Balfour Beatty’s business appealed to him, and the chance to make a difference through technology was even more enticing.

After interviewing for the role, Cameron was able to land a job as a Senior Technology Specialist and joined the company at the beginning of 2020. This was, of course, right before the pandemic hit. Thankfully, he had a couple of months to build relationships and get to know his colleagues and job sites before the pandemic caused workforces across the industry to take additional safety measures, like remote working and split shifts, to stop the spread of COVID-19. Despite limited in-person interaction, Cameron has thoroughly enjoyed his new role. “I don’t see it as work. I enjoy what I do. It’s awesome to wake up every day, even during the pandemic, and be able to make an impact.”

A Focus on Tools, Not Toys

Cameron and his team helped the company adapt to remote construction management to promote social distancing, limit attendance at active job sites, and maintain safe conditions for everyone.

His team is focused on various technologies and innovations that may help projects become more efficient. “Our motto is ‘Tools, not toys.’” It doesn’t matter how cool a product is if it can’t help his team in their daily work routines. He enjoys showing his colleagues new ways of doing things, especially when technology can help them complete tasks more efficiently.

When Cameron saw the demo of OpenSpace, he explored its use cases. “Early in my career, I was responsible for pre-pour photo documentation. I would walk around with the inspectors taking photos on my iPhone. I must have taken 200 photos. We uploaded them to a folder and we hoped we never had to look at them again. But if an issue came up, it was always the one photo we needed that was the one we didn’t have! I knew what that struggle was like, and OpenSpace has been an innovative partner as I continue to explore use cases for their tool and software.”

In Cameron’s experience, the promise of new technology is sometimes too good to be true. Cameron was tasked with teaching the team how to use various technologies and rolling out solutions across the nation. “In construction, budgets are tight, and technology is expensive. With OpenSpace, the team and the owner saw various ways to utilize the technology in the delivery of construction projects.”

Cameron is especially interested in the type of data analysis that technologies can provide to assist with the company’s efficiency overall. Using OpenSpace, he can track who is conducting captures and how frequently, along with how much time is spent documenting the job site and the associated investment. He can get a sense of how work is being completed against schedules and identifies areas where teams might want to spend extra focus. “We can learn a lot from these types of analytics, and various technology solutions allow us to do just that, without having to manually log and track those figures.”

Today, Cameron touches 20+ diverse projects, including high-rise residential projects and commercial offices. He is helping teams discover the opportunities technology may provide for themselves, which he says aids in on-the-ground adoption. His colleagues have been able to use OpenSpace in a variety of ways, and so far the company has found it useful to assist in keeping projects on schedule, thereby preventing rework which can translate to cost savings and can aid other project logistics planning tools during project operations and sequencing.

Recently, one project utilized OpenSpace to avoid tearing open a finished wall. “Instead of tearing open a brand-new finished wall to say, essentially, ‘I told you so,’ we went back and looked at their captures and were able to provide an alternative solution for their task.”

What Does Being a Pathfinder Mean?

When it comes to being a Pathfinder, Cameron says it’s important not to be afraid of the unknown. He sees every experience as a learning opportunity and a chance to forge a new path forward. He recently earned his certification as a SCRUM Master and his certificate in Agile Project Management, increasing the tools in his arsenal with which to succeed in his role.

He takes inspiration from Thomas Edison, who reportedly said, “I have not failed 10,000 times. I have successfully found 10,000 ways that will not work.” He urges his colleagues to be confident in themselves and open-minded. “Don’t be so stuck in your ways that you rely too much on one direction. You have to be agile and able to pivot; otherwise, you won’t be set up for success.”

When Cameron visits his childhood home, he enjoys comparing notes with his father.

“It’s great to have that bond with my dad and be able to talk shop. When I go home, I still go into the shop and see everyone who works there. At Balfour, we see the latest and greatest in technology, so I’m always saying, ‘You guys should get this or that,’ and they’ll say, ‘Get out of here! We don’t have the budget for that!’”

Pathfinders are power users like Cameron who excel at using OpenSpace. You can check out all of our published Pathfinder Spotlights in the OpenSpace Community gallery. If you’d like to be a Pathfinder, submit your Pathfinder application today.