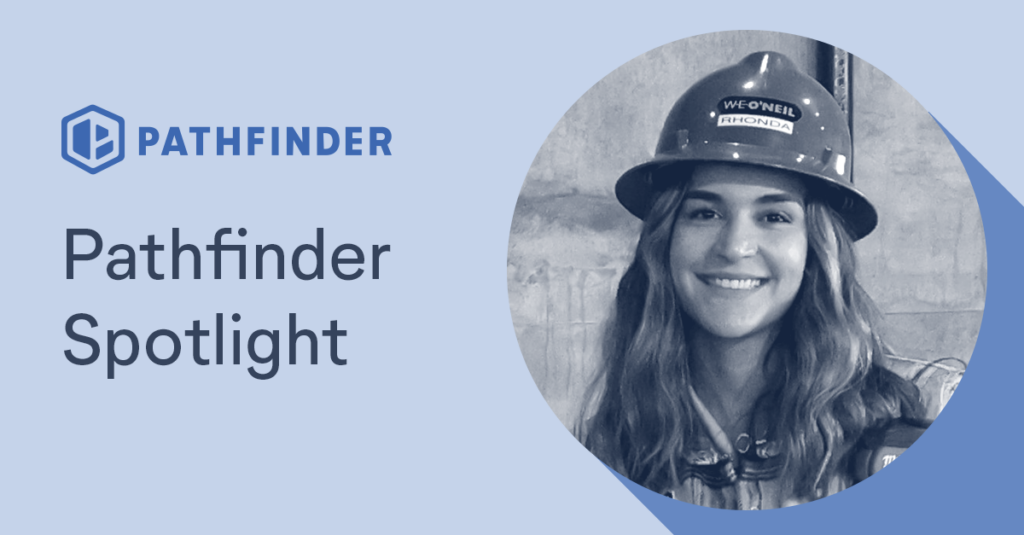 Meet February’s Pathfinder, Rhonda El-Hachache, a California-based Assistant Project Manager at W.E. O’Neil Construction. Her inclination to work with others–first through community service and later through the teamwork required in construction–has made her dynamic in her profession. In her position, she blends an eye for the details with team player savvy to facilitate the execution of large construction projects in SoCal.

Growing up in a close-knit Lebanese family

Rhonda was born in Glendale a few years after her parents immigrated from Beirut, Lebanon to sunny, coastal California. Despite being geographically removed from much of her extended family, Rhonda’s immediate family—made up of her mother, father, and a brother four years her senior—more than made up for it by being incredibly close.

In her early years, Rhonda found that the city of Glendale itself–with its proximity to cultural epicenters like Los Angeles–was a welcoming and exciting place to grow up. “Since I don’t have family in Glendale outside of my immediate family, it was important to be able to have friends,” she recalled. “I got to meet people from so many different cultures.”

Her father worked as a bookkeeper and as a bartender at an area hotel while her mother spent many years as a stay-at-home mom, though she later built a flourishing career as a hairstylist. Rhonda’s mother always maintained an interest in construction—a fascination that seemed to run in the family.

“My mom’s dad actually had his own construction company with his father in Lebanon,” Rhonda recalled. “So my mom always says that I get this interest from him.”

Though Rhonda may have inherited an affinity for construction, her path to arriving at this career choice evolved over the course of many years.

A passion for math, science, and serving others

It was in high school that Rhonda discovered the passions that would eventually lead her to her career in construction: A knack for mathematics and the sciences, as well as a commitment to helping others.

In her studies, she spent many hours in science labs and math classrooms, where she not only discovered her talent for these subjects, but also the desire to apply them to her future career—especially physics. Physics itself has many natural applications in construction, engineering, and renovation, but in her early high school years, Rhonda wasn’t sure where she might use this interest in her future career.

During after-school hours, she participated in service-oriented extracurriculars. She was an active member of the Key Club at her school, for example, a student-led organization that aims to foster leadership skills while making the world a better place through community service.

“I wanted to use my spare time outside of school to do something positive and impactful,” she said. “Community service let me do that.”

In her junior year of high school, Rhonda was introduced to civil engineering and it immediately sparked her interest. She was fascinated by the idea of using her skills to help create large structures and saw how this work served the wider community by making the spaces in which we live—both public and private—more accessible and functional.

She made a few friends who were studying civil engineering at the college level and poured over books and web pages on the subject in her free time. It wasn’t long before she was “completely hooked,” as she put it.

Rhonda wanted to strike a certain balance through her college experience. She wanted to stay close to her family as well as gain the independence that comes with living on her own. So she primarily applied to southern California schools and was delighted to be accepted at the University of California, Los Angeles (UCLA).

There were many reasons that led her to this choice—from its proximity to Glendale to its beautiful campus. “I had heard from lots of people that it was an incredible college experience,” she remembered. And it proved to be one for Rhonda, too.

She entered UCLA as a freshman with her major in civil engineering already declared. Throughout her early college years, she explored the professional possibilities the major offered: from structural and geotechnical specialties to concentrations in environment and water resources.

She continued to perform strongly in her core classes and was leaning towards a geotechnical path when she was introduced to the world of construction as a possible career route at a campus job fair.

“Previously, construction was never really introduced as an option to me,” Rhonda said. “There was no construction major at UCLA at the time, so I wasn’t familiar with it.” But as she strolled around UCLA’s expansive and numerous job fairs, she saw lots of construction companies tabling. As she became more involved with organizations on-campus and off (like the American Society of Civil Engineers, or ASCE) she met more and more people who had put their civil engineering degrees to use in construction.

“It really piqued my interest,” she remembered. It was really an internship experience, however, that made her path forward clear.

W.E. O’Neil Construction—a large company with branches throughout the U.S.—was a frequent tabler at UCLA’s career fairs, and also presented workshops and trainings in the civil engineering department.

Rhonda liked the material W.E. O’Neil presented and appreciated the way the company was run—where, despite the size of the L.A. branch, everyone seemed to be like family. She was thrilled when she was offered an internship at the company after her junior year.

That summer revealed to Rhonda a whole new way of using her civil engineering degree. It wasn’t her first internship (she had completed one the previous summer for the L.A. Bureau of Sanitation) but it did excite her in new ways.

To Rhonda, that experience was different from the more hands-off internship she had done monitoring sewage lines at the Bureau of Sanitation or the textbook learning she had done in her college courses.

“That internship really solidified things for me,” she said. “I realized I really, really liked it and wanted to continue in construction.”

She was offered a full-time position at W.E. O’Neil after graduation in order to do just that.

Upon graduation in 2015, Rhonda dove into her work at W.E. O’Neil. She started her career there as a project engineer and after several years was promoted to senior project engineer. Recently she took on additional responsibilities as a project manager for the company.

She found a perfect blend of her interests and talents in the work—a balance of computer tasks and things that must be done on-site. And, of course, the continual inspiration of daily progress on each project, from pre-construction all the way to close-out.

The company’s policy of collaboration also resonated with Rhonda. People on different projects are encouraged to exchange information and a wealth of trainings brings different teams together to learn from one another while developing a sense of community. There’s also a mentorship program in place that helps team members outline and achieve their career goals with the guidance of more senior staff, contributing to a supportive work culture that makes Rhonda feel right at home.

Rhonda’s current project—a mixed-use office tower of eight stories with 600 residential units, a floor of retail shops, and three levels of subterranean parking in west L.A.—was the first at the company to utilize OpenSpace.

A project manager had heard about OpenSpace’s capabilities—like the ability to select grid lines that match up with 360-degree captures—and “we all just knew those capabilities were going to be super beneficial,” Rhonda recalled.

The company now works with over a dozen 360° cameras nationwide that are put to use at strategic milestones in the construction process. For example, Rhonda assigns project engineers to walk the site using OpenSpace before any concrete pours, so that if post tension cables were already in the deck, she can reference the captures later for their approximate locations. OpenSpace is also used during the rough framing stage and before the units are closed with drywall.

“It’s so useful to have OpenSpace captures so we can look at past work and make sure something got done,” she noted, “and any time we’re not able to be on-site, we can use OpenSpace to know everything that’s going on.”

Currently, OpenSpace is put to work on the project practically every day, with a schedule set to capture different sections of the tower on different days in order to provide evolving and thorough documentation of the expansive project.

Though Rhonda primarily coordinates the schedules for OpenSpace’s use these days instead of using the equipment herself, she keeps the 360° camera’s magnetic mount on her hardhat so that anytime she’s on-site, she can put OpenSpace to use to keep track of the progress on her project.

Rhonda hopes to continue growing as a project manager at W.E. O’Neil, eventually taking on that role on different types of construction projects that will help her become increasingly well-rounded in the technical aspects of the work.

She also hopes that with more experience, she will be better able to guide her team to success through mentorship, insight, and leadership skills. “I love contributing as an individual to every one of my projects,” she said, “but it’s important to remember that we’re here as a team to get these big projects done. That teamwork mindset is really important in order to be successful.”

Rhonda’s affinity for teamwork, paired with her technical skill and attention to detail, has made her able to successfully see major projects through to completion—and she hopes to do much more of that in the future.

“Being a pathfinder is about going above and beyond,” Rhonda said. “It’s about being one step ahead. It’s about foreseeing what issues might come up and ensuring success at every stage of the process.”

Rhonda was quick to point out, however, that more than any of that, being a pathfinder means sharing your knowledge with others. After many years of community service, benefitting from mentorship, and working as a part of a team to complete big projects, Rhonda has seen firsthand the power of collaboration and knowledge-sharing.

“It’s about taking that extra step,” she said. “Sharing your knowledge with others contributes to the success of every one of your projects.”

Pathfinders are power users like Rhonda who excel at using OpenSpace. You can check out all of our published Pathfinder Spotlights in the OpenSpace Community gallery. If you’d like to be a Pathfinder, submit your Pathfinder application today.