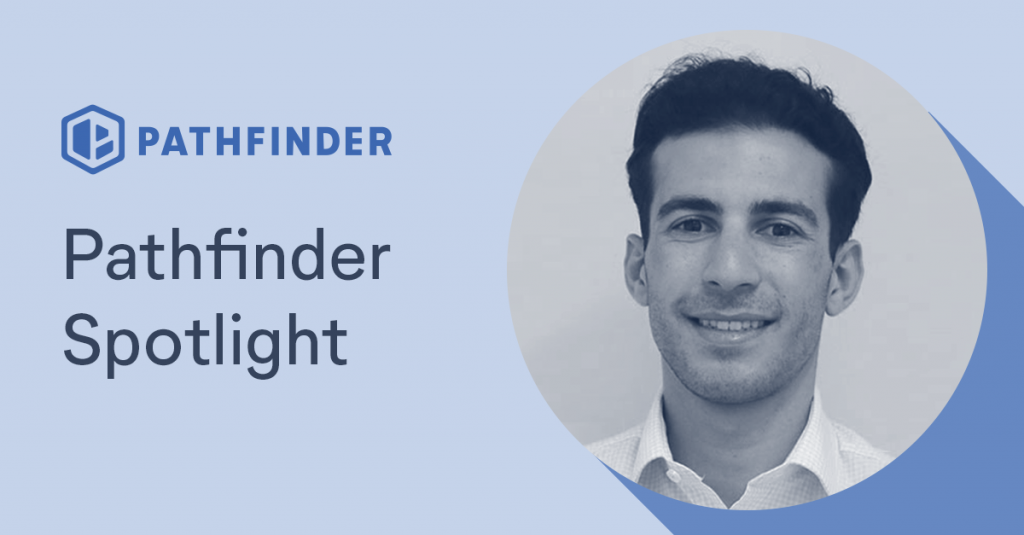 Meet our June Pathfinder, Luke Bottono, a Construction Manager at Knight Harwood. After letting go of his boyhood dream of being a pro footballer, he energetically pursued a career in the construction industry.

Moving from London to the Suburbs for School

Luke was born in Bethnal Green, East London, to a father of Italian/English descent and a mother of Maltese descent. When he was 12, the family moved to a leafy town in Essex—primarily so that he and his younger brother (who grew up to become a chartered accountant) could get a better education.

Although Essex was extremely different from what he was used to—both in terms of the landscape and culture—Luke thrived in his new school. He attributes the ease of the transition to being a people person and his ability to get along with different types of people. “I made some really good friends that I still keep in contact with to this day,” he said.

Like many other English boys, Luke was obsessed with football (soccer) when he was growing up and nurtured dreams of becoming a pro footballer. When it became clear that he should have a more practical plan at around age 16, he gravitated toward construction.

He attributes his early interest in construction to British shows like “Grand Designs” and “Homes Under the Hammer,” which chronicled home renovation projects. “I found what they were doing interesting and spoke to some teachers and other people about how to get into construction,” he recalled.

Instead of taking the A-level exams that are required for entrance into four-year universities in the U.K., Luke did what’s known as a BTEC, which is an A-Level equivalent diploma that focuses on construction management.

After completing the course, he secured a trainee apprenticeship position at the global construction company Skanska, which involved a day of College/University and four days in the field per week. “During my time at Skanska, I undertook an HNC (Higher National Certificate in Construction and the Built Environment and a BSc (Bachelor of Sciences) in Construction Management. It was a real benefit to gain site experience whilst still learning the theory in the classroom.”

As a student in that program, he wrote a dissertation on the relationship between technology, processes, and culture and investigated emerging tech like Microsoft HoloLens—which was an early indication of the direction his career would take.

Luke’s first project at Skanska was helping to build a new campus for South Essex College in the town of Grays from the ground up; it was literally a parking lot when they began and was a two-year undertaking from beginning to end.

In the beginning, Luke was on the receiving end of certain looks and remarks from workers and tradesmen in their 30s and 40s who had been in construction for years. “As an 18-year-old site supervisor, it’s sometimes hard to get your point across,” he said. “But I used my strengths and ended up building a reputation for myself where I was respected.”

After that initial project, Luke was assigned to a 19-story office block in London, which was a lot more fast-paced. By being in the field every day, he found he was learning the business quickly. “I could go to a lecture and hear about piling for three or four hours, but experience is second to none,” he said.

Moving On to Knight Harwood

Luke experienced some amazing highs while at Skanska, including working on the 45-story skyscraper, 52 Lime Street (nicknamed ‘The Scalpel’ for resembling a surgeon’s scalpel) and getting to see the London skyline at night from the top. (It was also incredibly fun to meet colleagues after work at the pub since there were about 100 people on the construction management team alone.)

He was also proud of the way he adopted new technologies on the job and was one of the first people to use BIM when it was introduced.

After seven years at Skanska, during which time he worked his way up from the role of Trainee Supervisor to Senior Construction Supervisor, he decided to move on and took a job at Knight Harwood around eighteen months ago.

“I’d been building similar kinds of projects for seven years and wanted more exposure to the construction industry and its many different sectors to gain more knowledge,” he said. “The projects at Knight Harwood are very unique—finished to a really high standard and at a really fast pace. That perspective is extremely interesting and beneficial to my career development.”

Using OpenSpace for a U.S.-Based Client

Luke’s responsibilities involve maintaining a list of key items and ensuring they’ve been handled. “You need to physically go out and make sure everyone’s on the ball,” he said. “A lot of it is communicating with the on-site team and trying to problem solve whilst maintaining high levels of quality and ensuring tasks are carried out in a safe manner.”

He first used OpenSpace last year for a project with U.S.-based client Peloton. The time difference made coordination extremely challenging, especially because the clients couldn’t fly over to the U.K. to see the job site in person due to the pandemic. The clients suggested that Luke and his colleagues capture the site using OpenSpace to make the weekly coordination meetings more productive.

After a quick onboarding session, he and a colleague started capturing the site on alternating days. They simply strapped a 360° camera to their hard hats and walked, and the captured imagery was automatically mapped to the project plans—making it easy for stakeholders anywhere to experience current site conditions.

“The client loved it because they could walk around the project remotely, and we could use it to track progress and pick up snags,” Luke said. “It was also a great way to look back in time and see what was behind walls or underneath slabs.”

OpenSpace facilitated the weekly meetings by enabling clients to answer certain questions for themselves by referring to the most up-to-date captures.

Though some people were initially skeptical and poked fun at Luke and his colleague for wearing a camera on their hard hats, they eventually came around. “Once we got them involved and onboarded, you could see the excitement from them as well,” he said.

What Does it Mean to Be a Pathfinder?

Luke views being a Pathfinder as an exciting opportunity to build his network globally by connecting with his peers at other companies. “This will allow us to share experiences and look at new, innovative ways to improve construction management—not only from the contractor side but for the entire project team,” he said.

In the meantime, Luke is looking forward to moving on to his next project with views to implement OpenSpace captures from beginning to end. He plans to continue working his way up the ranks and getting to the project management level as a next step.

Pathfinders are power users like Luke who excel at using OpenSpace. You can check out all of our published Pathfinder Spotlights in the OpenSpace Community gallery. If you’d like to be a Pathfinder, submit your Pathfinder application today.