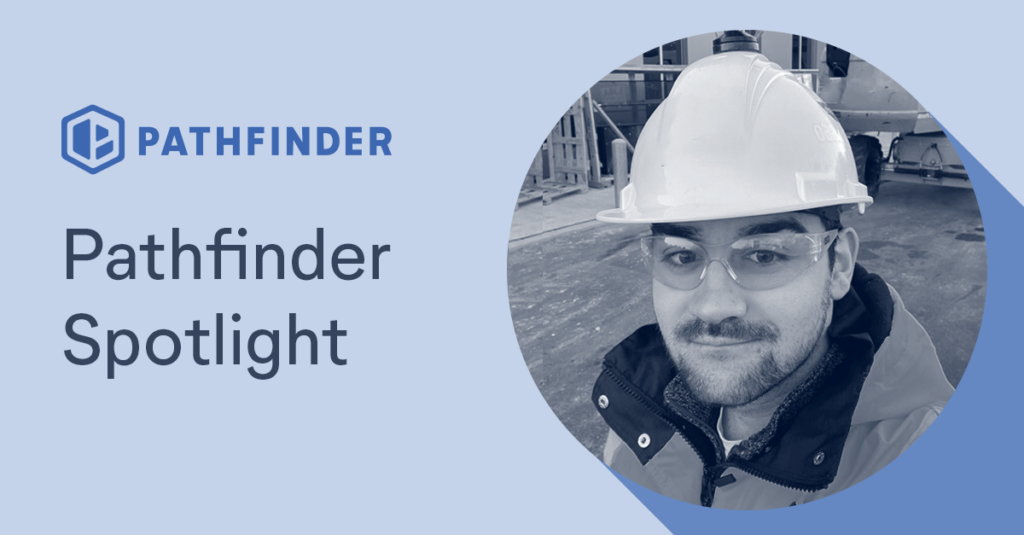 Meet January’s Pathfinder, Kevin Lyons, a New Jersey-based Project Engineer for Sloan & Company. He greatly enjoys the thrill of racing down a snowy mountain on his snowboard or pole vaulting high in the air. In high school, he also discovered a new talent for building and rendering digital design models, which led him to his current job where he blends his knack for new technologies with the course of construction.

Growing up in the New Jersey suburbs

Kevin spent his childhood in the suburbs of New Jersey, just 30 to 40 minutes outside of the bustling streets of New York City. He shared his home with his two accountant parents and his younger brother Eric and a young three-year-old English Black Lab named Chief.

Most of his younger years were spent obsessed with soccer, though his attention turned to more unusual and extreme sports like pole vaulting and snowboarding as he got older. When he wasn’t at practice or planning a weekend trip to hit the slopes, he would often travel with his family to Maryland, where he spent afternoons jet skiing in the state’s many bays.

Kevin was always an average student, but, as he put it, “I knew my persistence with learning new technology and solving problems would go a long way.” It was when he entered high school that he discovered the perfect application for those abilities.

Discovering the worlds of digital modeling and construction

During his freshman year, Kevin discovered a course of study that gave him a clearer vision of his future—a computer-aided design (CAD) class. He ended up taking four years of CAD design at the high school level, where he started using software like Revit, SOLIDWORKS, and AutoCAD.

Kevin participated in memorable projects like the build of a 12-cylinder race car engine, but a digital modeling project of Brooklyn townhouses was what truly captivated him. It sparked his interest in a construction career and gave him an idea of how he might fit into the field. After his very first year of digital design, he remembers thinking to himself, “I’m on to something.”

By the time Kevin headed to college at Roger Williams University in Rhode Island, he was fairly certain he wanted to pursue a degree in Construction Management. It was his experience working on the modeling of the Brooklyn townhouses that made him realize that construction was the path best suited to his interests and talents.

A summer internship after his freshman year further validated this idea. He spent that summer break doing site work for a family-owned business near his hometown that focused on both commercial and residential construction. The projects he worked on included restaurants, minor league baseball fields, and residential townhouses.

On his very first day on the job, Kevin’s confidence got a boost when he had a run-in with an OSHA inspector at the site of a Texas Roadhouse Restaurant. It was nearing the end of the workday, and the August summer heat was intense. “Everyone was ready to go home already,” Kevin remembered. That’s when he noticed a man in a navy blue suit, tinted safety glasses, and a hardhat surveying the work Kevin had installed—a septic system with pipes running out to the street.

With the clock ticking closer and closer to 5pm, the inspector finally finished up and approached him. “Let me take a look down there,” he said after Kevin spent the day working in the seven-foot trench. The Inspector said, “Well done, see you next time.”

His success on his first day made Kevin certain he was on the right path. When he returned to school in the fall, he formally declared his major. Eager to gain more experience, he spent the next two summers interning at Shawmut Construction in New York City.

In his formal studies at Roger Williams, Kevin found that he still enjoyed virtual modeling while discovering new interests in construction scheduling and BIM software.

He even took his know-how to Albany for the Associated Schools of Construction Student Competition, where he and a team of five other students spent a whole day (from 8am to 8pm) troubleshooting the renovation of a dining commons at the University of Massachusetts. In a 12-hour time frame the team coordinated on completing the preconstruction services of a mock contract, estimate, schedule, QA/QC reports, site logistics plan, Revit model, and presentation to illustrate how the team could keep students safe during the renovation of the dining commons.

The project presented a number of challenges and the team had to propose solutions while keeping the site also safe and secure. His team ended up placing third overall out of ten different competing collegiate construction programs.

After completing a Revit model and putting together supplemental documents for this project, this real-time problem-solving inspired Kevin to set him up for success down the line. “These were a few key elements I really enjoyed that helped me maintain a drive to continue learning,” he remembers.

And naturally, the learning didn’t stop there.

A new position and new technology

After completing a third internship at Sloan & Company (an interior and exterior systems contractor specializing in drywall, acoustic ceilings, and millwork in Mountain Lakes, N.J.), Kevin was pleased to be offered a full-time position there as a Project Engineer upon graduation. He started his new position just as Sloan & Company was considering new ways to capture site images and relay project information between team members.

“My boss and I sat down to figure out the best way to visualize our work in a way that would align with our scheduling software,” Kevin recalled. They quickly landed on OpenSpace.

After the software and equipment were purchased in January 2020, Kevin, along with a few Project Managers and Superintendents, sat in on a training session. His background and a natural proclivity for using new technologies made him an obvious fit to spearhead OpenSpace’s roll-out at Sloan & Company. In that capacity, he had to learn the ins and outs of the 360 photo documentation software and the company’s new Insta360 camera.

Shortly after that, he was assigned to his first project—which was the first at Sloan & Company to leverage OpenSpace.

Using OpenSpace to renovate a dormitory at West Point

“This is the project I learned the most on,” Kevin said of renovating a large dormitory at West Point Military Academy on the banks of the Hudson River.

The dorm had a traditional design fortified with New York granite (i.e., long hallways with living spaces and bathrooms spread across 300,000 square feet.) Kevin’s first task was to capture each modular room using OpenSpace, assess the differences between them via the captured imagery, and report back on where the team should anticipate roadblocks during drywall and plumbing installation.

“Using OpenSpace was an amazing experience,” Kevin recalled. “We could detect and capture issues that could go wrong in such small areas of the dormitory and then easily share them with the team, allowing them to picture the site in real time.”

The applications of OpenSpace didn’t stop there—OpenSpace images were integrated into reports and quality control logs for visual reference, too.

Expanding Sloan & Company’s use of OpenSpace

Kevin has been happy to be the OpenSpace point person, guiding his colleagues on best practices for smoother project management and greater productivity. Right now, OpenSpace is being used on seven projects at the company and counting.

Those projects include health services centers and schools, both private and public. One particularly exciting new project is a modern expansive hybrid health center and medical office building at Princeton University, which includes classrooms, offices, lobbies, and operating rooms.

“It’s great because OpenSpace does a lot of the heavy lifting for me,” Kevin said. “All I have to do is press a few buttons to start and stop the camera. You can even use it without a steady connection of Wi-Fi to capture up to a million square feet.”

He described each day on the job and each new project as learning experiences shedding light on what most excites him: digital design, new technology, and next-level problem-solving.

Kevin himself benefited from mentorship during his formal education and his many internships. That’s something that he would like to pay forward, especially in relation to his use of technologies like OpenSpace.

“I’ve already learned so much about this technology from others,” he said, “Even others at an equal skill level are always bringing new ideas and applications to the table.”

As a proud member of the OpenSpace community, Kevin looks to a future where he can expand his knowledge and “give hope and advice to younger users.”

“A pathfinder is someone you can reach out to who has expertise,” he concluded. “I’m really excited to one day be able to say ‘Ask me some questions, let me know where you want to improve. I’m a pathfinder.’”

Pathfinders are power users like Kevin who excel at using OpenSpace. You can check out all of our published Pathfinder Spotlights in the OpenSpace Community gallery. If you’d like to be a Pathfinder, submit your Pathfinder application today.