Meet Chris Owen, a Technologist Whose Love of Gadgets Led Him to Construction 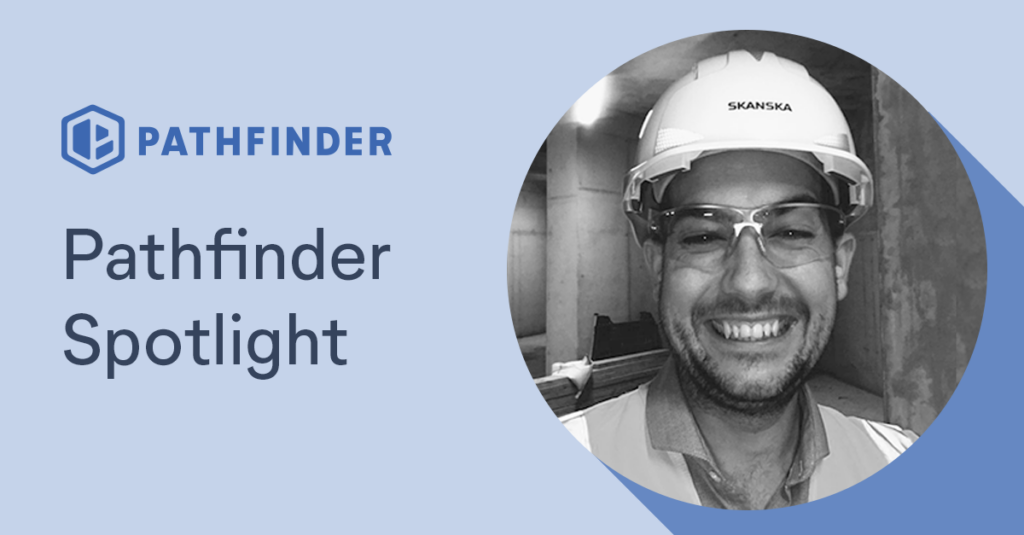 Meet our September Pathfinder, Chris Owen, a London-based BIM Coordinator for Skanska. He had an expat upbringing in Thailand, but his family eventually returned to the UK so he and his sister could prepare for university. Though he initially studied sports science with an eye toward becoming a sports therapist, he ended up discovering construction and hasn’t looked back.

Growing Up in Thailand with Expat Parents

Chris was born in Bangkok to English and Welsh parents who were keen to live abroad and looking for a new adventure to take together. After leaving behind their life in the UK, they started a tourism business in Thailand that organized team-building events for international companies.

The family moved to Phuket after he was born, and he loved growing up there. It was still largely undeveloped during his early childhood with plenty of dirt roads, and the beach was five minutes away from their house. The water was incredibly warm, and he loved to swim or wakeboard almost every day as he got older.

He attended an international school and had friends from Australia, the US, China, and many other countries—not to mention Thailand. He loved playing soccer and participated in competitions throughout Thailand and other Asian countries. (In his younger days, he played striker, but now he’s moved down the pitch and plays right back.)

Acclimating to Life in the UK

Chris’s family moved back to the UK when he was 14 and his older sister was 16, and it was a major culture shock—largely due to England’s cold, rainy weather.

“It didn’t rain much in Thailand other than the tropical season,” he recalled.

But soccer gave him a social outlet, and he joined local teams in Nantwich in the Midlands and then Swansea in Wales, where he moved to join his father. He never looked back and has only returned to Thailand once, when he was 16.

In school, he gravitated toward practical, hands-on classes where he could learn about electronics, design, and IT. He started cultivating an enduring love for technology and gadgets at that time but ultimately decided to study for a BTEC in sports science because of his passion for soccer and other sports. (In English high schools, students specialize in a specific course of study in preparation for university.)

Shifting Focus During his University Years

Chris enrolled at the University of the West of England in Bristol and initially studied sports therapy in the hopes of becoming a sports therapist.

He struggled academically during his first year and had a growing sense that he was in the wrong field. Around that time, he started watching “Grand Designs,” a TV show about modern architecture and incredible buildings around the world, and started thinking about a career in construction.

He knew he wanted to focus on emerging technology, so he changed his major to Architectural Technology and Design, where he began learning about 3D modeling.

This new path immediately felt like a better fit for him.

Getting a Foot in the Door

After his second year, Chris did a four-month internship at a small architectural firm in Bristol, which gave him a good baseline understanding of the industry. In the weeks leading up to graduation, he got a job offer from a “right to light” provider, which focuses on assessing the shade impact of new construction on surrounding buildings, but it wasn’t quite for him.

At a showcase of student work shortly before graduation, Chris decided to print out business cards and place them next to his portfolio which contained plans, drawings, and 3D visualisations. It seemed like a longshot, but a few weeks later, he got a call from Buro Happold, a multidisciplinary engineering consultancy in Bath, which wanted him to interview. A couple of his classmates were already working there, so he happily accepted the job when it was offered to him and moved to Bath.

“It was my mum’s idea to print business cards, and I printed 100 and only gave out five,” he recalled. “But it worked!”

Moving Up the Ranks

Chris’s first job at Buro Happold was as a graduate BIM modeler, focused on modeling structural elements for massive projects in the Middle East (including a large airport facility in Abu Dhabi), U.S., and southeast England. He mostly worked out of the office and was only on-site two or three times.

“I got to work with the structural engineers and learned a lot,” he said.

After about two years, he started longing for life in a bigger city and found a job at London-based Meinhardt, another large engineering consultancy, where he already had friends working. The projects were physically much closer to home (mostly in London), and Chris worked as a Revit technician, again doing 3D modeling on the structural side.

After another two years, he joined Bryden Wood, a mid-size architectural practice with expertise in the public sector. They work within the public sector and have strict COBie and digital deliverables, and Chris learned a tremendous amount in his role as a structural Revit technician.

Next, he was interested in working for a large general contracting firm and found a job at Skanska as a BIM Coordinator—a role he’s occupied since January 2019. It was the first job that allowed him to be on-site regularly, and he enjoys that aspect of it enormously.

When Chris first joined Skanska, he shadowed a colleague who was planning to move abroad in order to get up to speed on safety best practices and the ins and outs of his new job.

“The first thing Skanska does is send you on all these training courses to make sure you’re site-ready from a health and safety point of view,” he said. “It was an important step and enabled me to prepare for life on site.”

When Chris joined initially, his team was using another 360° photo documentation platform to capture the site, but it was incredibly time-consuming, and management was seeking an alternative. Once they started using OpenSpace, they were delighted by how easy and fast it was to use.

“You just put a camera on your hard hat and have a little wander around. OpenSpace captures automatically and maps imagery to the plan,” Chris said. “I can cover 14 floors in about an hour on my current project, compared to the two hours it took with the other tool on my previous project, which was half the square footage.”

Chris is currently using OpenSpace on a renovation project with retail on the ground level, office space above, and a communal terrace on the roof. The majority of the existing structure is being retained and Skanska is building three stories on top of the existing 11. The existing building is being reclad, and the facade is being moved.

OpenSpace has been especially useful with damage disputes since Skanska can easily determine whether damage to a slab or beam happened under their watch or prior to handoff (when another contractor was doing the demolition works). The team can simply refer to previous time-stamped images to determine roughly when the damage occurred, which helps them pinpoint the responsible party.

“It’s been really handy for Skanska in terms of mitigating risk and cost control,” Chris said.

OpenSpace has also been helpful for internal coordination. For example, the mechanical team can closely monitor installation work week by week without needing to be regularly on site.

“A lot of the existing structures aren’t captured in models or drawings, so it’s useful for our MEP coordinators to look at OpenSpace captures and then determine that we can’t put a pipe where they were planning, or we have to shift the ductwork,” he said. “We can also send captures to the architect to communicate existing conditions and help them make adjustments quickly.”

Chris is also enthusiastic about using OpenSpace Track for automatic progress tracking and plans to test it for installing insulation on his current project soon.

“It’s going to save our planners countless hours of having to go out with a pen and paper and estimate percent completes in a very old-school way,” he said. Read this case study to learn other ways that OpenSpace has been helpful for the company.

Looking Toward the Future

Chris loves working on-site and hopes to continue to do so as his career progresses.

“In my early days working for consultancies, we were basically in our own little world, interacting with colleagues internally,” he said. “Out on-site, you have laborers and consultants coming in, as well as the client team. It’s a lot more interesting!”

He’s enthusiastic about the opportunity to discover new technologies that can lead to more efficient ways of building. His passion for emerging tech and new tools is an all-encompassing one that spans his personal and professional lives. At home, he has a 3D printer and a drone.

Clearly, his passion for gadgets remains as strong as ever. Fortunately, it led him to a great career!

Chris views being a Pathfinder as an opportunity to connect with others in the construction industry, including those from other countries, and to share ideas and experiences.

“For me, it’s a chance to connect with other like-minded people around the world. OpenSpace is based in North America and you have customers in Australia and other countries. It also allows me to showcase myself as a digital innovator within Skanska,” he said.

We are very happy that Chris is one of our Pathfinders and we can’t wait to see what he will accomplish in the future.

Pathfinders are power users like Chris who excel at using OpenSpace. You can check out all of our published Pathfinder Spotlights in the OpenSpace Community gallery. If you’d like to be a Pathfinder, submit your Pathfinder application today.