Meet Dante DeFazio, a Natural Problem Solver Whose Love of Learning Led Him to Construction 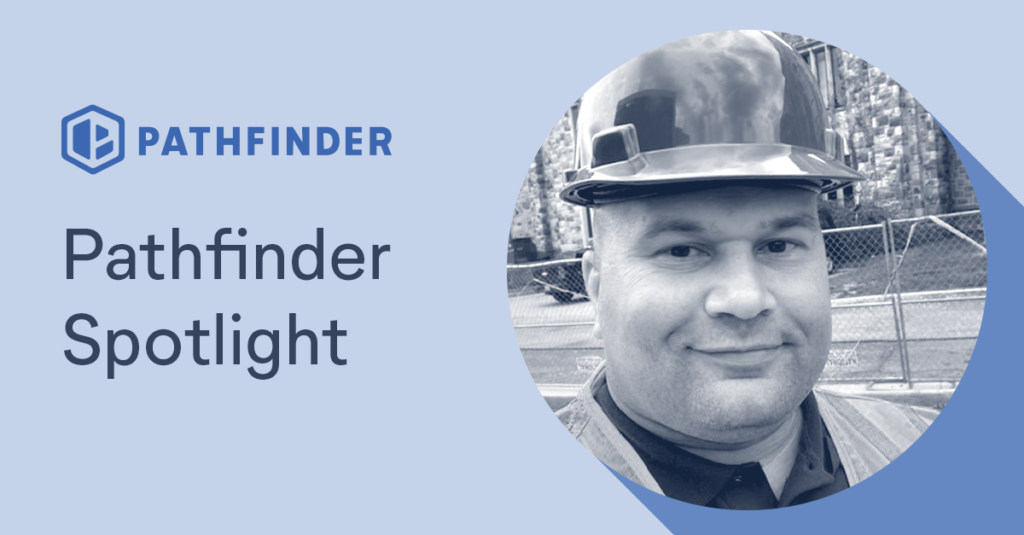 Meet our October Pathfinder, Dante DeFazio, a Project Manager at Virginia Tech, which also happens to be his alma mater. He’s spent much of his career on the move—living and working in the DC area, Oklahoma City, Austin, TX, and now, southwest Virginia. He discovered the construction industry through a chance happening when he was in high school and hasn’t looked back.

Growing Up in a Quiet Virginia Town

Dante grew up in Winchester, Va., as the youngest of five children. Since it’s only an hour and a half away from DC, and increasingly seen as a more affordable alternative to the closer suburbs, the town has gotten more built up in recent years, But back in the ‘80s and ‘90s when he was growing up, it was a small place where everyone knew each other. As teenagers, Dante and his friends would drive around or go to the gas station or Walmart for a rousing session of people watching, since there weren’t many other options for entertainment.

His dad encouraged all of his kids to play sports, so Dante played football, wrestled, and threw shot put for his high school team. He also loved basketball and played occasional pick-up games with his friends outside of school.

Discovering Construction as a Career Path

One summer when Dante was still in high school, he had two jobs: as a dishwasher at an all-you-can-eat-buffet-style restaurant and worked on framing a house. The latter had come about by chance; Dante’s high school woodshop teacher was building a house across the street from the DeFazio family’s, and his father suggested that he go across the street and offer a hand.

Initially, his teacher (who was building the house on his own, acting as the general contractor) used Dante as a go-fer, but he gradually gave the teenage boy more responsibility. Together, they were framing walls and putting on the roof. Dante recalls being asked to balance himself on a makeshift ladder of two-by-fours that had been nailed together in order to install plywood sheathing on the roof.

“My teacher stated, ‘Are you scared of heights? Well… me too, so that’s why you’re going up there,’” Dante recalled with a laugh. “I got over my fear of heights partially because of that summer.”

By the end of the summer, he had learned a few things. First, he didn’t want to continue washing dishes (the screams of “BUS PAN CHANGE!” haunt him to this day) and knew college was imperative. Second, he had a great feeling of accomplishment at his construction job and deeply enjoyed the work.

“I could look out the window of my parents’ house and see the progress from across the street, and it was such a gratifying feeling,” he said.

Up to that point, Dante hadn’t had a clear idea of what he wanted to do for a career. After that summer, Dante knew he wanted to involve himself in something based around architecture or engineering and his older brother pointed him toward the construction management program at Virginia Tech. He decided to apply and was accepted.

Gaining Broad Experience in the Industry

Dante enjoyed his years at Virginia Tech and did an internship every summer.

“I fell in love with the construction industry and the excitement of watching a site progress from day to day,” he said. “There’s always so much to learn—so many details and different facets. It’s never-ending, but in a good way.”

After graduating, he got a job in DC for a general contractor that focused on historic renovations. He was initially a Superintendent because he wanted hands-on field experience, but his long-term goal was to have an office-based role. Dante met his wife and had his first child while there.

Five years into his first job, he shifted over as a Project Manager with a smaller general contractor that performed work mainly for the postal service. During his time in that role, he had his second child, and his family decided to relocate from the congested DC area to an area with more space. He took a job that relocated him to Oklahoma City to work on a military base project, and the family eventually joined him once he got settled into the role.

He recalls making the long drive from northern Virginia to Oklahoma with a 4-year-old and a 2-year-old who wasn’t yet potty-trained. But it was all worth it in the end! They enjoyed the lower cost of living and stayed for five years, during which time Dante had moved over to a different company and again, made room for their third child.

His new company needed staff to relocate to Austin, Texas, where a construction boom was underway, and Dante was intrigued. For the first eight or nine months, he drove down to Texas for the week and came back to Oklahoma on weekends, but it was unsustainable, and he and his wife decided that the whole family would move again. By that point, they were expecting their fourth child, and it was summertime in Texas, so the air conditioning was set to MAX before their fourth child came.

After a relatively short time in Austin (most of which was during the pandemic), Dante found a job at his alma mater, Virginia Tech, as a project manager in the renovations division—focused on smaller projects of less than $3 million. In January 2021, the family moved from Texas to Blacksburg, Va., which is a three- to four-hour drive away from their close family.

“It’s close enough to have a weekend together without breaking the bank to get on a plane,” he said.

Using OpenSpace in Texas to Save Time and Improve Collaboration

Dante discovered OpenSpace when he was working on an 18-story building in Austin, which was the tallest of his career up to that point. He was constantly walking up and down stairs to check on the status of various areas and taking furious notes, and there wasn’t a great way to share what he had learned with his coworkers (apart from writing it all down in an email). He figured there had to be a better way to monitor progress and keep everyone on the same page.

A couple of colleagues recommended he use a 360° camera to document the site, and he was pleased when he got one approved in the budget. It enabled him to capture video of his walks, but the raw footage was cumbersome to fast-forward or rewind—and difficult to figure out which areas were which in the absence of any doors or walls.

“It wasn’t much better than taking 1,000 photos and putting them in a folder,” he said.

Dante was next assigned to work on a 67-story building, and it was then that he started testing OpenSpace to walk the slab in the pre-pour phase. All he had to do was strap the 360° camera to his hard hat and walk, and imagery was automatically pinned to the floor plan. Some of his colleagues were skeptical at first, but they started to come around when they saw what OpenSpace could do. If, for example, something needed to be checked on the 50th floor once it was built, Dante could produce imagery on his phone or computer to show the latest status of that area, saving someone the 20 minutes it would take just to navigate to the location.

“I showed them how we could have one person walk the site and make the data available to everyone,” he said. “Then we could verify our embeds and sleeves virtually, that needed to be placed prior to pouring, and address issues from there. People started realizing how much time they were saving since they didn’t have to personally go check out 15 different things on multiple floors.”

Since Dante has 15 to 20 projects going at any given time, he can quickly refer to OpenSpace imagery if he needs to figure out something small, such as the number of lights in a room, without having to walk between buildings.

In the case of an office renovation, OpenSpace made it easy to capture exactly what the space looked like prior to work commencing—and have the furniture returned to the correct position after walls had been repainted and new carpeting had been put in.

“I can generally walk these spaces very quickly and easily, and I don’t have to update my captures as much as with a 60-story building,” he said. “But OpenSpace is still very useful, especially with so many people still working virtually. We can send the captures to people who aren’t on-site to keep everyone aligned.”

As a Pathfinder, Dante sees himself as someone who clears barriers.

“I think of a Pathfinder as a person who goes out into the woods first,” he said. “They get snagged by sticker bushes or walk through spider webs, but clear out the path so the next person to come through doesn’t get caught up as much. They find solutions to get around hindrances.”

We’re thrilled that we can help Dante blaze a trail for others to follow, and we’re grateful that he has chosen OpenSpace as his partner in this work. We look forward to seeing what else he accomplishes in the very near future.

Pathfinders are power users like Dante who excel at using OpenSpace. You can check out all of our published Pathfinder Spotlights in the OpenSpace Community gallery. If you’d like to be a Pathfinder, submit your Pathfinder application today.