Meet Ethan Meyers, a Natural-Born Builder Who Found His Calling in Construction 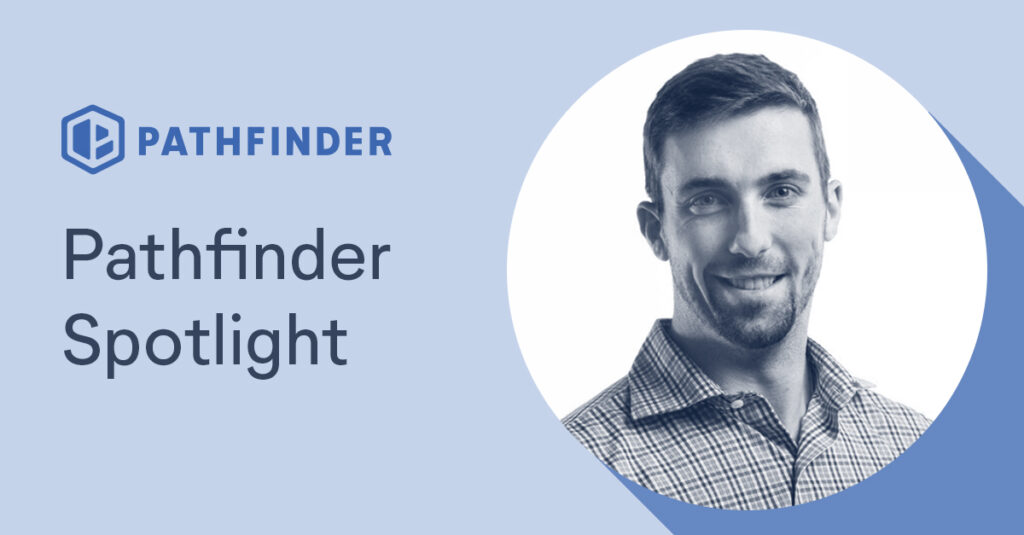 Meet our August Pathfinder, Ethan Meyers, a Kansas City-based Project Engineer for A.L. Huber General Contractor. Growing up, he was an imaginative child who tinkered with engines and toy trucks. His love of building things ultimately led him to a career in construction.

An Early Enthusiasm for Construction and Engineering

Ethan grew up south of Kansas City with a twin sister who’s now a nurse. His parents both work in industrial processing—with his dad in the telecom sector and his mom currently in cybersecurity.

He first began demonstrating an interest in how things are put together at an early age. At age four, like so many other small boys, he was obsessed with using his Tonka bulldozer to create mud and rock volcanoes. When he got a bit older, he started building little motorized vehicles and boats with cardboard, super glue, and masking tape and then throwing them into the creek in his backyard to see how they performed. “Some sank and some swam. It was trial and error!” he recalled.

His interest in engineering and construction intensified when he got to high school, where he also played football and baseball. In drafting class, students were challenged to build bridges out of toothpicks and then test them to see whose creation could hold the most weight, and his team’s bridge was among the sturdiest in the class.

Ethan has always been a lover of the outdoors and knew he wanted a career where he could work outside in the field. He briefly considered agriculture, since it’s a huge business in Kansas and he has farmers in his family, but ultimately decided it wasn’t for him.

When he was still in high school, a family friend who was an architect arranged a construction site visit to give him a taste of what a career in construction might be like. He liked what he saw—from the strong collaboration to the multiple moving parts that seemed to keep things fresh and interesting.

It left a strong enough impression that he decided to pursue a degree in construction science and construction management at Kansas State University a couple of hours away from home.

Gaining Exposure to the Construction Industry

After his freshman year in college, Ethan did a summer internship with a window installation company, which had him working nights on a school project. Looking back, he learned a great deal from this experience—especially about the importance of quality control.

The following summer, he moved to Dallas to get out of his comfort zone and worked on a hospital project, which he found fascinating. He knew then that he wanted to work at a firm that specializes in unique, complex projects.

In the summer of 2018 after his junior year, Ethan took a job at a 120-year-old, family-owned general contracting firm called A.L. Huber, which was close to home. (So close, in fact, that it was in the process of building his mother’s new office building.)

He thrived at A.L. Huber and when they offered him a full-time position, he agreed to come back full-time after graduating from college. Upon graduating in May 2019, he took a five-day vacation and then went straight to work.

Ethan started at A.L Huber as an estimator, helping to bid out projects. When the time came to begin construction on those projects about six months after his start date, he assumed the role of Project Engineer.

His first project was for a non-profit dog rehabilitation and adoption center, which was a great learning experience. “You never want to start footings for a building in the middle of winter, but that’s just how things landed,” he recalled.

Next, he was assigned to a complex interior renovation project at the local Kansas City Sprint campus (just prior to the company’s merger with T-Mobile), where he was responsible for progress tracking and coordination amongst trades. This meant going into each room with a tripod and camera, taking pictures, and then uploading and organizing them into the correct folders. It was a tedious process that took two days every time documenting 250,000sf of office space.

“I decided that I couldn’t go through another one of these large projects with the ​​same manual camera setup,” he said. “That’s when I started doing research on 360 photo documentation technology and got in touch with OpenSpace.”

Ethan began using OpenSpace in January 2021 and is currently using it to capture two additional T-Mobile buildings totaling 500,000 square feet on the same corporate campus. It takes him about an hour to walk each building with a camera strapped to his hard hat, which is a fraction of the time the traditional, manual process for site documentation would require. With OpenSpace, the images were automatically captured and pinned to the correct location on the floorplan.

“I’d get funny looks at first when people saw me with a camera on my hard hat,” he said. “But now that they understand the value it delivers, they think it’s pretty cool.”

“OpenSpace captures have been especially useful for coordination. For example, when we have multiple trade partners involved from across the country, we are able to hop on a video call and verify what is installed is correct with a first-person view of the space.”

It’s also easy to flag potential issues, like a water line in the ceiling, and share them with the architect to find out how they should be handled—all without the architect needing to be on-site. Finally, the ability to quickly pull up relevant, up-to-date captures has been useful for coordinating with clients at weekly meetings, especially since client representatives haven’t been on-site as much since the pandemic began.

“OpenSpace helps because I’m handling a lot of coordination items,” Ethan said. “I can double-check that things have been handled correctly by referring to previous captures, which helps to coordinate with trades. If I notice that something is off or an RFI was missed, I can easily take a snapshot and show them what they need to take a look at.”

Ethan is proud of the role he’s assumed at A.L. Huber as a construction technology evangelist.

“As a Pathfinder, I’ve been able to show my colleagues new ways to improve our processes and improve the atmosphere for our clients,” he said. “It’s opened me up to the idea that technology can help every stakeholder in the process.”

Ethan is also excited about the opportunity to test new features and give feedback to inform product development. For example, he recently tested OpenSpace’s 3D scan capabilities, which allow teams to capture a full, three-dimensional view of an area inside a job site and take measurements of it within OpenSpace.

As for the future, he hopes to be running projects himself in the not-too-distant future. In the near term, he’s excited about A.L. Huber taking on more projects in the athletic sector; they currently have a couple of stadium projects underway. As a quality-focused company, Ethan sees OpenSpaces being a value-added technology for future projects. We’re very excited that Ethan has been able to use OpenSpace to further his career and his team’s performance, and we can’t wait to see what he does next.

Pathfinders are power users like Ethan who excel at using OpenSpace. You can check out all of our published Pathfinder Spotlights in the OpenSpace Community gallery. If you’d like to be a Pathfinder, submit your Pathfinder application today.