Meet Elyse Whissell Bergeron, a Gregarious “Geek” Whose Love of Learning Made Her an Expert in VDC 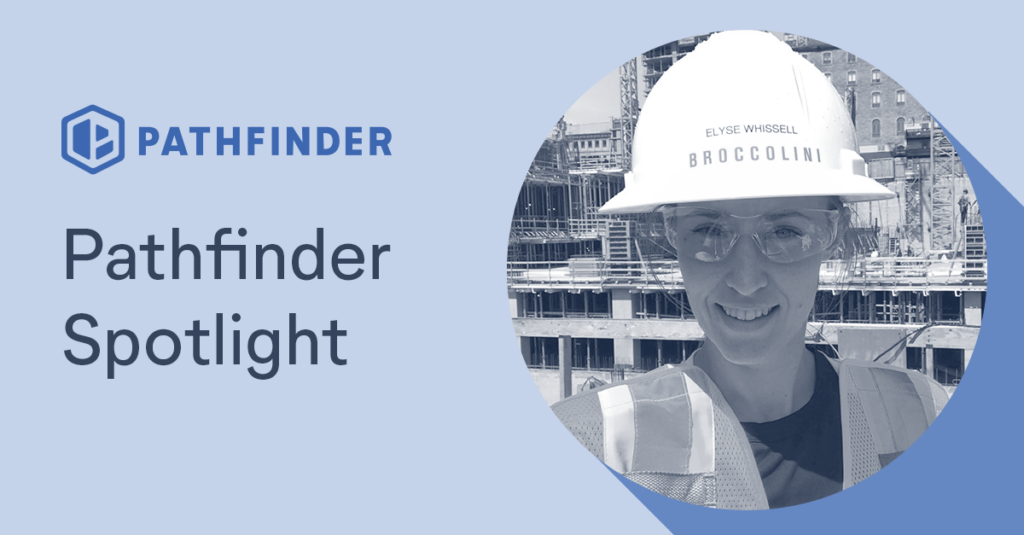 Meet our Pathfinder, Elyse Whissell Bergeron, who works at Broccolini, in Quebec, Canada. Her incredible people skills and love of learning have propelled her to a successful career in construction.

A Childhood Fascination With Building

Elyse now leads a five-person BIM/VDC team at Broccolini, but her path to working in the construction industry wasn’t a straight line—even though she had an early passion for building things as a little girl.

As a child growing up in a military family on the outskirts of Montréal, Elyse was always creative. She had dolls, but instead of dressing them up, she built houses for them out of cardboard boxes, toilet paper rolls, and other recycled materials that she could find.

Her father was a handyman, and she spent countless hours in his garage as his assistant, doing tasks like collecting the dropped screws with a magnet or cleaning up the sawdust. On weekend mornings, they often went to Home Depot to buy materials for various projects for house renovations. To this day, the smell and sound of wood and materials are comforting to her.

An Early Interest in Architecture

Elyse attended a private, all-girls high school, where she was a good student and played various sports. A self-described “geek,” she is grateful that schoolwork always came fairly easy to her and she enjoyed learning. Defying the geek stereotype, she was very social and enjoyed her high school experience immensely. She was interested in becoming an architect, but her counselor discouraged her from pursuing it based on her test scores and possibly based on her gender.

Instead, knowing she was artistic, the counselor encouraged her to pursue graphic design, which she went on to study at college. It would be the first of many degrees and certifications she would earn.

After graduating in 2009, she worked as a graphic designer, did a lot of freelance design work, and ended up at an agency doing post-production on films and TV ads. Throughout her studies, she had worked in retail for ALDO shoes, so they offered her a position as the design studio assistant manager. After a couple of years in that role, she began to hit a wall and feel like she wanted to take her career in another direction.

Despite what her counselor had told her many years before, Elyse decided to take the first step toward what would become a successful career in construction.

Looking for a new challenge, Elyse enrolled in a comprehensive 18-month program for drafting, which encompassed drafting architectural plans, structural concrete plans, steel fabrication drawings, and MEP plans—which she particularly loved. After graduating, she got a job as a drafting technician at BONE Structure, a Canadian home-building company that specializes in light steel construction systems. She stayed there for about a year and focused mainly on drafting architectural permit plans.

Because of her interest in MEP, she next took a job at LAPORTE, an engineering firm specializing in pharmaceutical, agrifood, and bioindustrial facilities, where her day-to-day focus was on 3D modeling. Her biggest project there was doing the modeling in Revit of process Skids for a client producing artificial hemoglobin. Since the leadership was interested in introducing VR into LAPORTE’s processes, Elyse also spent significant time on research and implementation of the technology—which helped seed her interest in emerging construction technology.

She next worked at the engineering firm EXP as an MEP BIM Manager for just under a year, fielding all technical questions for the province of Quebec and training people on Revit while taking night classes on MEP design. In May 2019, she joined Broccolini as a BIM Coordinator, drawn to the company’s varied portfolio of projects and rich family history in Montréal.

Settling Into a Leadership Role at Broccolini

What she loves about Broccolini is its friendly and supportive culture. While Elyse is comfortable being the only woman in the room or on a job site, in previous jobs she had also occasionally run into people who didn’t believe in her abilities or expertise because of her gender. At Broccolini, it’s just the opposite—everyone, regardless of their background, is respected and teamwork is paramount.

“It’s a family business, and the culture just clicked for me,” she said. “I don’t feel like I have to know everything and shouldn’t ask questions. It’s feedback I’ve also heard from a lot of the women here, who previously had different experiences elsewhere. Integrity is one of Broccolini’s key values and we feel it.”

Now, after taking many steps to increase her knowledge over the years, Elyse is in a position to share what she’s learned with others. Broccolini recently promoted her to BIM/VDC manager and put her in charge of Broccolini’s growing BIM team, which now consists of five people—up from two last August.

“I oversee logistical aspects, such as budgets and resource planning, but in the end, we’re a team that works together for the same objectives,” she said. “I don’t feel like I’m alone pushing and driving the initiatives. The dynamic is great.”

As one of the most tech-savvy people at Broccolini, Elyse was tasked with evaluating OpenSpace and a competing solution, StructionSite, in Summer 2019. OpenSpace was much more intuitive to use, and she passed along that feedback to Broccolini’s leadership. The firm now uses OpenSpace to document all of its projects and for progress tracking. Since only essential workers have been allowed on most job sites over the past year, OpenSpace’s virtual walkthroughs and progress tracking capabilities have been especially valuable.

“We were lucky to already have OpenSpace in place when COVID-19 hit, but we understood the advantages of 360° photo documentation well before that,” she said.

Elyse and her colleagues have uncovered numerous benefits unlocked by OpenSpace. Since it captures in the background as a field team member walks the site with a camera strapped to their hard hat, the resulting documentation is much more complete. It’s also much faster to find pictures when you need them since captured imagery is automatically mapped to project plans.

Since OpenSpace’s progress tracking feature can be used to visualize how work by trades is proceeding week by week (or even day by day), it’s helpful for holding subcontractors accountable if they attempt to over-charge.

Elyse’s team has also made significant use of OpenSpace’s BIM Viewer feature, which creates a side-by-side view of actual site conditions alongside the model. For example, on a $400 million project where the client planned to take over operations and maintenance, Broccolini used OpenSpace for QA/QC to spot discrepancies between the model and the build. In cases where the installation diverged substantially from the model, they could go back to the trades and have adjustments made.

“It’s one thing to have a new technology and another to find all the right ways of applying it,” said Elyse, who recently joined OpenSpace’s Pathfinders group of super-users. “We’re really pleased with the value we’ve gotten from OpenSpace across so many different areas.”

Reflecting on Her Path

In retrospect, Elyse wonders if she would have become an architect if her high school counselor had been more encouraging, but she’s thrilled to be where she is. She’s a big believer in the idea that it’s not the destination that matters; it’s the journey.

“I had a background in graphic design and motion design, which brought a different sensibility to my work in 3D modeling and how I structure information,” she said. “I really love my job and my coworkers now. So everything happens for a reason.”

Pathfinders are power users like Elyse who excel at using OpenSpace. You can check out all of our published Pathfinder Spotlights in the OpenSpace Community gallery. If you’d like to be a Pathfinder, submit your Pathfinder application today.