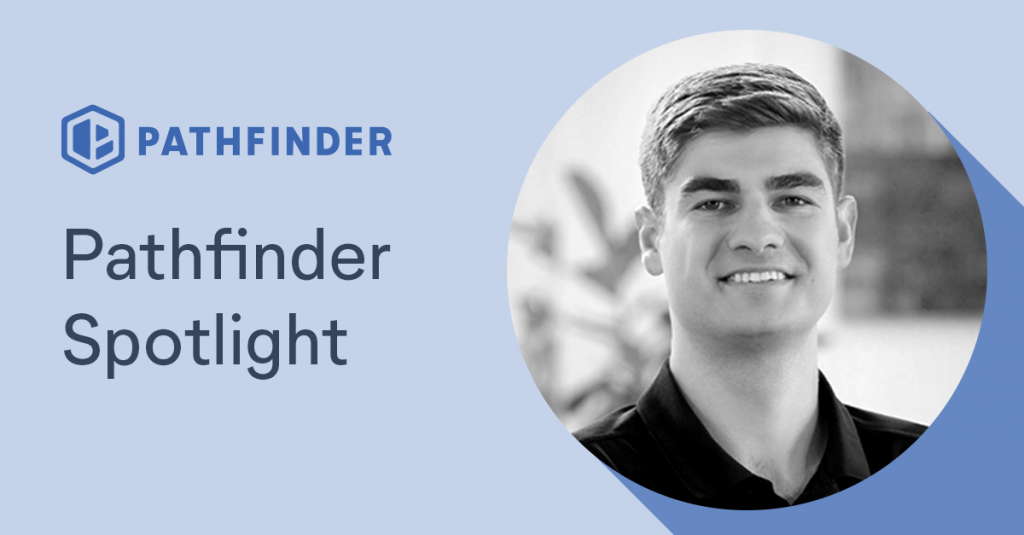 Meet our latest Pathfinder, Kendal Cleary, who joined North Carolina-based Barringer Construction full-time after interning there in college. His work ethic and passion for learning have led to growth opportunities on a wide variety of projects.

Inspiration from His Father

Kendal grew up in Apex, N.C., just outside of Raleigh, with an older brother and younger sister. As an outdoor enthusiast who loved playing sports, he knew he didn’t ever want a job that would tether him to a desk or office. He also knew that “cold calling” would never be for him.

His father did offshore drilling and geotechnical engineering work, which sparked his interest in civil engineering and construction from an early age. The construction industry seemed full of opportunities—almost to the point of being overwhelming.

Zeroing in on a Career Path

When he arrived at East Carolina University for college, Kendal decided to study construction management and loved how hands-on the program was—and how it balanced academics with field experience. “You start to realize that construction is so much more than what people think,” he said. “It’s not just a guy in a hard hat swinging a hammer; there’s so much preparation involved, which is why I started to be passionate about it.”

During his first summer of college, Kendal worked as a field technician for Mosquito Authority. The following summers he interned at S&ME, a civil engineering firm, and then interned at Barringer Construction after his junior year in 2018. The Charlotte-based company was new to Raleigh at the time, and he was one of the first 10 employees in the local office. (The Raleigh office has since grown to 50 people.)

Thrown into the Deep End

Since his new Barringer colleagues were incredibly busy getting the Raleigh office up and running that summer, Cleary volunteered to oversee the renovation of their own office space. “I said, ‘Hey, I’ll take a stab at this,’” he recalled. “I’m definitely someone who doesn’t say no, which can be counterproductive at times when you’re caught in many different directions. But I’ve always loved challenges.”

The renovation went well, and Kendal was offered a full-time job as a Project Engineer. He went back to school for one final semester and then started at Barringer on a permanent basis in January 2018.

Kendal’s career at Barringer has followed a noticeable pattern; every job is bigger and harder than the last—presenting a new challenge. “You get the chance, and they trust you to step up,” he said.

After starting full-time, he was assigned to work on a lobby renovation of a functioning 30-story Wells Fargo tower in downtown Raleigh that required 13 different permits. The phased approach Barringer had to take to keep egress open presented the biggest challenge; Kendal described it as a cycle of demolition, renovation, and cleanup, which had to be repeated for various sections.

From there, Kendal was assigned to a three-story, out-of-the-ground new structure with a glass curtain wall for First Bank. Up to that point, he had only done interior work and “upfits,” so this posed a different type of challenge. Since his college coursework had mostly focused on ground-up work, it simultaneously felt familiar, and he liked knowing that no existing conditions could end up altering the project’s path.

After piloting OpenSpace on the First Bank project, Kendal became one of the first users of the technology at Barringer, though several of his colleagues followed suit shortly after. He would walk the site once or twice a week with a 360° camera strapped to his hard hat, and 360 imagery captured in the background would be automatically mapped to the project plan, rendering virtual walkthroughs that allowed anyone to experience up-to-date site conditions.

This was extremely useful when COVID hit since owners and architects stopped coming to the site regularly. But they could still refer to up-to-date photo documentation from OpenSpace during virtual OAC meetings and be confident that the project was moving forward.

Through his involvement in the business development side of the business, Kendal has seen OpenSpace become a major selling point for Barringer in pursuits. He expects this to continue after COVID since clients will still recognize the value of virtual walkthroughs, especially when they’re managing projects from a different region or state. “We don’t want to be another GC in the market,” he said. “We want to be the most sought-after GC and give clients the ‘wow’ factor.”

Mentorship and Giving Back

Kendal is currently assigned to a data center with a fuel replacement scope in Winston-Salem, which poses an entirely new challenge. He’d like to eventually become a Project Manager. “I’d love nothing more than to stay at Barringer forever,” he said.

Outside of work, he’s gotten involved with a local “Connect for Success” program, which helps high school students in career and technical education (CTE) and workshop classes transition to careers in the trades. The mission of the non-profit resonated with him, since he can recall the feeling of information overload he had as a teenager when considering potential career paths and the stakes of making a good choice. “College isn’t for everyone, so it’s about providing insight and teaching kids about the breadth of the construction industry so they can figure out which career is the right fit,” he said.

He’s also taken on running the Barringer internship program for Raleigh, which involves setting up “lunch and learns” and providing additional training when it’s needed. “There are a lot of leaders at Barringer who gave me an extra hand, so I wanted to give back,” he said.

What Does It Mean to Be a Pathfinder?

For Kendal, being a Pathfinder means being a future leader and role model for the next generation—taking your own lessons and dedicating the time needed to pass them along to those who are coming up behind you. He also believes that it’s about taking a proactive role in vetting and implementing the new technologies that will make the construction industry more efficient and rewarding in the long run.

Pathfinders are power users like Kendal who excel at using OpenSpace. You can check out all of our published Pathfinder Spotlights in the OpenSpace Community gallery. If you’d like to be a Pathfinder, submit your Pathfinder application today.