Meet Kirsten Ratzlaff, Who Is Leading the Way for Women in Construction 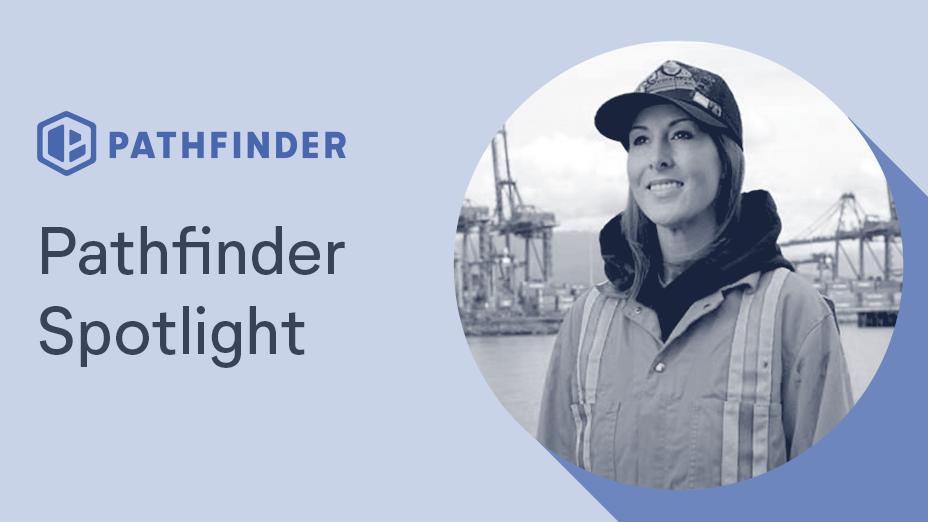 Meet May’s Pathfinder, Kirsten Ratzlaff, a seasoned electrician and longshoreman, currently working as a safety officer at HR Pacific in British Columbia. Kirsten’s drive to never stop learning, alongside a knack for working with her hands, has made her successful in many different pursuits, while her passion for supporting other women in male-dominated fields has also made her an inspiration.

A “Farm Kid and a Tomboy”

Kirsten grew up in Langley, British Columbia, a small town just north of Canada’s border with Washington state. Her parents had a five-acre farm complete with chickens, goats, rabbits, horses, cats, dogs, and even turkeys for a few years. Alongside her little sister, she helped out both at the farm and the family business, an education supply company. It was during these formative years that Kirsten fell in love with working with her hands, whether that meant organizing boxes at the warehouse or tending to plants and livestock back at the farm.

“It also made me into a real tomboy,” she said, “but I always had an artsy side.”

When she wasn’t riding horses, she was fully invested in creating art—a passion she pursues to this day in the form of acrylic painting and a burgeoning photography portrait business.

While her formal education in rural Langley left something to be desired, Kirsten’s parents supported her many passions and encouraged her to explore different professional opportunities possible, though it was some time before she hit upon a career in construction.

“My family always encouraged me to chase my dreams,” she said, “and that made it possible for me to end up where I have.”

Discovering the World and a Trade

After high school, Kirsten’s natural inclination for adventure took her to Banff for a year, where she worked and snowboarded before becoming close with some Australians—eventually traveling there with them and spending six months exploring the country.

Upon her return to Canada, Kirsten took a job waitressing. She knew she wasn’t interested in a traditional four-year degree program and wasn’t certain what path her life would take. It was during this time that she noticed male friends working in the trades—and making double what she was while waitressing.

“I thought to myself: If they can do it, so can I,” she recalled. 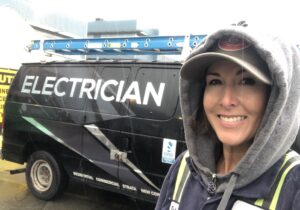 It was then that she enrolled in a Trades Discovery program at the British Columbia Institute of Technology (BCIT). The course surveyed more than 22 different trades, and electrical work impressed her the most.

Given her love of adventure, construction seemed like a natural fit that would make use of the skills she was learning as an electrician. With construction’s emphasis on progress, ever-changing tasks, and new things to learn daily, she was excited about the possibilities the field offered her.

Kirsten’s career has taken her far. She’s worked on projects in Saskatchewan, Alberta, and Fort McMurray. She also spent 12 years as a longshoreman on the docks of Vancouver. 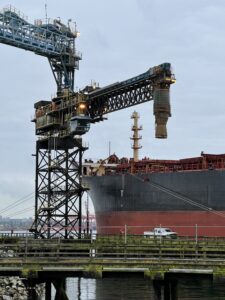 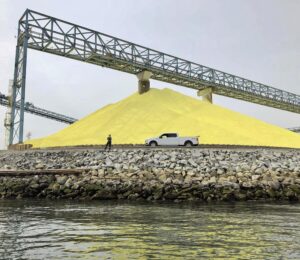 She’s even taught the next generation of electricians at BCIT, emphasizing the need for women to step into these roles. 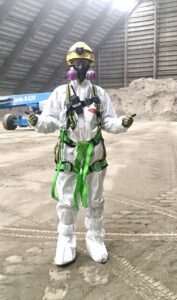 But before she became a role model for so many, she invested in her own education. After her six months of trades discovery, she went straight into a pre-apprenticeship program for 10 months to sharpen her electrical skills. After that, she quickly found a job doing commercial construction, which left a profound impact on her.

“I became interested in the safety aspects of construction,” Kirsten said. “Back then, there weren’t many safety protocols, and you’d see time and again that young guys who were eager to impress were the ones that got hurt.”

While the seeds of a future as a safety officer had taken root, she also spent 10 weeks of every year back at school, continuing to deepen her expertise. Soon, she had earned her “Red Seal,” Canada’s national standard for tradespeople—opening up new possibilities and pay grades. 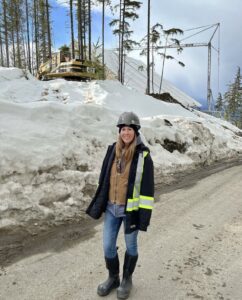 Kirsten stayed at her first job for several years before leaving to work on a large construction project in Fort McMurray—an experience she remembers as challenging and cold (with temperatures sometimes plunging to -20°), “but I stuck it out,” she recalls with a laugh.

After that project wrapped three months later, she took a 40-day hiatus with her sister, traveling to Thailand.

“This is something I love about the trades,” she said. “You usually have free time after a project ends before you pick up another one. You’re also in charge of the jobs you work on, which means I haven’t ever had to give up my love of travel.”

This is a rhythm she has maintained, balancing her professional growth with adventure all around the globe. She’s traveled to Vietnam, South Korea, Hong Kong, Panama, Costa Rica, the Galapagos, and many parts of Europe.

Between trips, she has worked on hotels and a hydrogen plant used to power green buses ahead of the 2010 Winter Olympics in Whistler. She also worked as a lamp operator on film sets before settling in Vancouver to begin work as a longshoreman there. 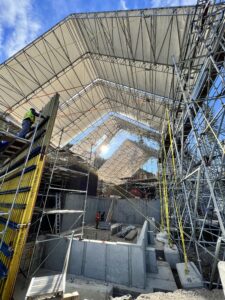 “I can’t believe all the places my career has taken me,” Kirsten reflected. “When I started out in construction, I never expected to be able to do everything I have.”

While HR Pacific (a family-owned builder and contractor with offices throughout British Columbia) has been using OpenSpace for several years, Kirsten began to use it when they broke ground on two large residential projects in late summer of 2021. Each is a luxury home with many custom features, such as gyms and infinity pools, in Revelstoke, a mountain town in southeast BC.

“OpenSpace works really well with my job as a safety officer because I walk the sites to make sure everything is safe anyway; why not wear a hardhat and record everything?” she said.

Kirsten primarily uses OpenSpace to document and share updates with the homeowners in weekly progress reports. But she was quick to point out that, long term, she envisions the software having many other applications at HR Pacific.

“It’s really multilayered, and it will be interesting to see what it shows us over the course of years,” she said.

Foremen and supervisors at HR Pacific are also integrating OpenSpace into their workflows “and really enjoy it,” Kirsten said. “It’s gratifying to capture what we’ve done. I think we should have it on every site.” 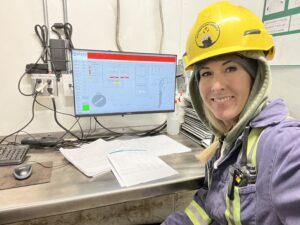 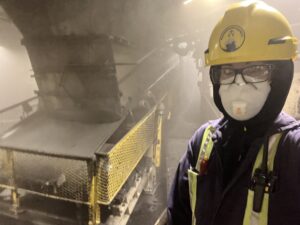 Inspiring Women in the Trades

“When I started out as an electrician, I didn’t work with any women,” Kirsten recalled. “Even in school, I was usually the only girl in my class. Now I have so many girlfriends who are electricians. The world of construction and the trades have come a long way.”

Much of that progress has been made thanks to women like Kirsten who not only set an example for young women aspiring to work in these areas—but also consciously make an effort to mentor and teach the next generation.

Both as an instructor at BCIT and informally on the job site, Kirsten has acted as a guide for others coming up in the field.

“I wanted to quit so many times in my career, but I’m so glad I never did,” she said. “I want to help other women avoid frustration because having support goes a long way, especially in a field that is so male-dominated.”

Her advice for women who are new to construction is simple: “Lean into your schooling, and learn to look for yourself. Construction sites are fast-moving environments, so you have to.”

Lastly, she advised that women seek out the support she sees as so crucial: “Join groups! Even if they’re just on Facebook. Give advice, and ask for it.”

“To me, what being a Pathfinder means is simple,” Kirsten said. “It’s using your experience and knowledge to look out for other people and advance companies with your experience.”

Kirsten herself is a perfect example of a woman innovating within her company while using her knowledge and experience to uplift others in the field.

You can find Kirsten’s creative work on Instagram @pointgreyphotography as well as frequent updates on many of her projects via HR Pacific’s account @hrpacific. 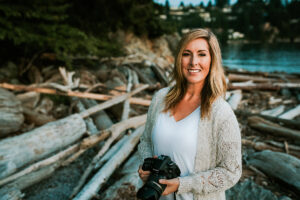 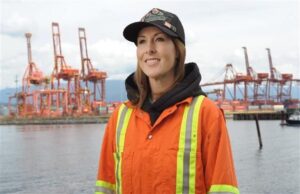 Pathfinders are power users like Kirsten who excel at using OpenSpace. You can check out all of our published Pathfinder Spotlights in the OpenSpace Community gallery. If you’d like to be a Pathfinder, submit your Pathfinder application today.